What Does A Rejection Letter Meme Have To Do With Speak? 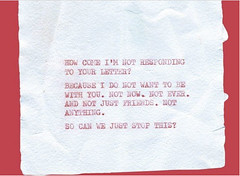 Bill Shapiro has spent a considerable amount of time collecting rejection letters received from the famous, like Andy Warhol for a proposed exhibit at the MOMA, and the anonymous, like those who have their relationship end over a text message. In the article “‘Other People’s Rejection Letters’: 8 Of the Craziest Rejection Letters” featured at The Huffington Post, Shapiro makes a compelling argument that in these tough economic times, graduating students will face a considerable number of rejection letters. However, it is these letters that will help bring them to their true potential later on down the road.

One example of these letters is the image to the left of this article text. In case you have difficulty reading it from the picture, it’s transcribed below:

How come I’m not responding to your letter?

Because I do not want to be with you. Not now. Not ever. Not just friends. Not anything.

So can we just stop this?

I read this article for the first time, while simultaneously reading Laurie Halse Anderson’s Speak. There is definitely a lot more going on in this novel than a single rejection letter. In fact, Melinda is ostracized by the entire school for calling the cops during a summer party. The rejection is palpable, but no one knows why she called them that night and why she refuses to speak to anyone. If they only knew, then likely they wouldn’t have rejected her, but Melinda is really worried that no one will believe her, which would be even worse.

While there is more going on then just a single rejection, there is, indeed, a single rejection letter taped to Melinda’s locker on Valentine’s Day. When she finds the message “thanks for understanding” and that a friendship gift has been returned, it is devastating. At the same time, however, this single act is a catalyst that helps Melinda live up to her potential.

Why do I make this argument? Well, sometimes rejection will make you stronger. Sometimes rejection will force you to open up your true self. In my opinion, Anderson shows that the rejection Melinda receives from her “friend” is part of the driving force that allows her to heal from what happened at the party and to finally speak from her authentic self.

So, what does a rejection letter meme have to do with Speak: I’d say everything. However, I’d love to hear what you think about Shapiro’s article, Anderson’s novel Speak and this commentary, so please leave your comments below!

3 comments for “What Does A Rejection Letter Meme Have To Do With Speak?”