Are You Hungry For The Hunger Games?: It’s A Reaping Day Giveaway! 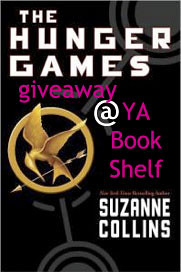 Last week I read and reviewed the first book in The Hunger Games trilogy, and I couldn’t say enough good things about it. In case you missed my review of The Hunger Games, you can check it out here. A couple of days ago, the second book in the series, Catching Fire, came to my doorstep, and I was again overwhelmed by the desire to squeee out loud from sheer excitement.

Although I tend to think that a lot of dystopian novels strike teens at the moment when they themselves are questioning the world around them, and thus, they seem to gel with this age group, feel free to prove me wrong! Truth be told, I’m far a teenager myself and couldn’t put TheHungerGames down for a minute. With this memory of how much I enjoyed first book in this series, it shouldn’t be surprising that two of the books I’m still really anticipating reading this summer are CatchingFire and the final installment in The Hunger Games trilogy, Mockingjay.

All of this build up is leaning toward two things: Mockingjay‘s release on August 24th, 2010 and a great giveaway that I want to announce to you today. Yes, you heard right: I did say something about a giveaway, while at the same time, discussing this trilogy at length. It can only mean one thing: YA Book Shelf has two copies of the paperback edition of The Hunger Games to give to two lucky Canadian residents. So sorry to my followers from across the boarder and throughout the world, but the Canadian only winner restriction is at the publisher’s request!

To enter, you only have to follow me on Twitter or my page on Facebook. Doing both will lead to extra entries being counted in your favor. You can also attain extra entries from helping to promote this contest and The Hunger Games in general as well as by answering the following question: are you Team Peeta, Team Gale or Team Katniss and why OR what do you predict will happen in the August 24th release of Mockingjay? (You see, unlike the novel’s Reaping Day, additional entries in the Reaping Day Giveaway might allow you to reap the rewards of this contest!) If you’ve heard the hype about this series, then you must be dying to know if it’s true – believe me, it is! This contest closes on Wednesday, July 14th @ 8pm EST, but if you aren’t the lucky winner, then you can always buy the paper back version anytime after July 6th!

36 comments for “Are You Hungry For The Hunger Games?: It’s A Reaping Day Giveaway!”