by Melissa Montovani on June 29, 2010 in Teen War And Conflict Novels • 2 Comments 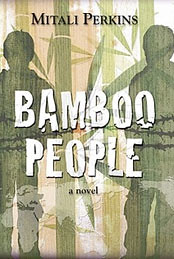 I’d never read anything by Mitali Perkins before I had the chance to check out her new novel, Bamboo People, but the story sounded like something I’d want to check out and now I’m really glad that I did. Told from the perspective of two teens on different sides of the conflict between the Burmese and Karenni peoples of modern day Burma, readers get to experience all angles, and they will definitely enjoy the journey.

Political narratives can be great, but occasionally, you feel like you’re being hit over the head with info from a single perspective. I would like to commend Mitali Perkins for never going over the edge with this one. Instead of the norm, she gives both voracious readers and reluctant ones alike a chance to learn from and about the conflict from both a child soldier’s and a refugee’s story simultaneously. From this perspective, the audience gets a fuller look at the conflict as a whole, which might only be possible because the author is neither Burmese nor Karenni, but she’s clearly done her research here. At the same time, those who are more familiar with the conflict in Burma will definitely find some amazing characters and a moving narrative to boot.

Some books with multiple narrators move back and forth, alternating between each of them with ease, but Perkins writes half the book continuously in the mind of Chiko and later switches to Tu Reh’s perspective when he is about to meet up with the other character. Clearly, this decision aids the author’s ability to tell a linear story about the events her characters are facing. However, as someone who loves to read and who values physical book collections, there was an added benefit to structuring BambooPeople in this way: I immediately felt a kinship with Chico when I learned that he was reading A Tale Of Two Cities in the opening moments. His ability to read and write sets Chiko apart among his peers and gives him a sense of pleasure, even when he’s at his lowest moments. I can envision a reluctant reader becoming a voracious one following Chiko’s example and that is, in the end, the goal of writing books for children and teens, isn’t it?

Not only are they on “opposite sides” of the conflict, but also Tu Reh’s story is very different from that of Chiko. Both of them have suffered losses, but they react in different ways: while Chiko must find a way to keep his promise to his father to look after his mother, Tu Reh is forced to decide between killing a boy younger than himself or carrying him to safety, even though he’s an enemy. Both of these “stories” are ones with which not only teens can readily identify, but also adults will feel similarly about the novel, so it’s no wonder that Publisher’s Weekly recently gave it a starred review. If you haven’t checked out this novel yet or any of the other books written by Mitali Perkins, I suggest that you find a way to get a copy on July 1st, 2010. Bamboo People will stick with you for quite some time after you’ve finished.

← What's In My Mailbox?: The June 28th Edition
Are You Hungry For The Hunger Games?: It’s A Reaping Day Giveaway! →