If I Stay Giveaway! 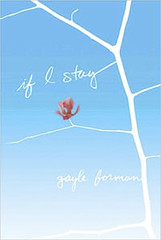 Yesterday on my site, I posted my weekly installment of What’s In My Mailbox?, and if you checked it out, you might have felt like it was a little bit of history repeating, at least in part. For those of you who are new to YA Book Shelf, then I’ll explain a little further. You see, last week when I announced the new books I received in the previous week, If I Stay by Gayle Forman was one of the books I mentioned, and yesterday, I announced a second copy.

I thought about what I could do with the extra copy for awhile: give it to a friend, keep it, donate it to the local library or maybe host a contest. Even though I’m excited about IfIStay, I wasn’t sure of anyone – other than bloggers – who might actively be seeking this book out. I really don’t need a second copy of the identical book lining my book shelves, so keeping it was out, and I’m pretty sure that the library doesn’t take paperback copies (because despite the cover image above, the books were both the paperback version with the girl on the front cover). The only thing left to do, would be to run a contest for the extra copy of If I Stay, so that’s exactly what I’m doing!

I’m very excited to read this book because it seems like it asks a number of hard to answer questions: the type for which many people have a ready answer, but would likely find themselves not always following through with what they’d think they wanted. Early on in the novel, we’re told that Mia has a good chance of getting into Julliard for her cello playing abilities. However, at the same time, she knows that if she does, she’ll make the already complicated relationship with her boyfriend even more difficult. Now that a lot of students are preparing to go away to university and college in the fall, I have a couple questions to ask: 1. Would you stay in your hometown rather than move away if it meant being closer to your boyfriend or girlfriend? 2. Would the prospect of moving away mean that the two of you (or at least one of you) would decide to break it off before leaving for school or would you stay together in a long-distance relationship?

← What's In My Mailbox?: The June 21st Edition
The Hunger Games →

53 comments for “If I Stay Giveaway!”