by Melissa Montovani on June 2, 2010 in Realistic Teen Fiction • 7 Comments 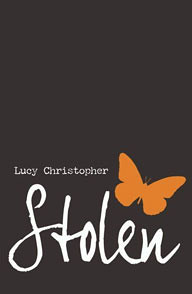 Eyes are said to be the windows to the soul. When someone looks you in the eye, we’re taught to believe they are telling the truth, that they mean us no harm. When they turn away after being “caught” looking at someone, we believe that the person in question is slightly embarrassed to be staring. These ideas are true often enough to be considered universal, but in Lucy Christopher‘s first YA realistically-told thriller, Stolen, everything that Gemma has learned in her short life is turned upside down. While starting as a 16-year-old girl on vacation with her parents, an encounter with a much older man and his familiar, piercing blue eyes leads to her kidnapping and being taken to the harrowing and lonely world of the Austrailian Outback by her captor.

Most books are written in the past or present tense, but it’s rare that the main character speaks directly to another character, especially not the “You” who kidnapped her. However, this is what the reader is pushed into when she opens the first page of Stolen. When I first began this book, I found Gemma speaking directly to Ty quite unsettling. Perhaps this effect is, indeed, what LucyChristopher was after at this point in the novel; in fact, even Gemma says that the look in his eyes both “unsettled” and “surprised” her. It’s rare that one can connect with a character, who is experiencing something so foreign to them, so quickly, but the writing style employed by Christopher makes it difficult to do otherwise.

Like most great novels this one employs numerous motifs and symbols to help deepen and broaden your understanding of the events. While one group of symbols helps strengthen the Gothic plotline, the other set of symbols serve to highlight a realist portrayal of the events, almost like a mirror. Both the house in the middle of the Outback and the desert itself are psychological extensions of Gemma’s own mind as is the case in all Gothic narratives. Her fear of the situation is reflected in the sounds and sights of the house, like the locked drawer, which symbolizes her inability to control her situation because she is “locked in” the house by the desert on all sides. However, the animals, like the camel, the snakes, and the moth, all foreshadow events that will take place and represent a particular character in the novel. One can tell that Christopher worked very hard to outline this narrative, and the results are quite brilliant.

While I haven’t outlined the premise completely, I think it’s best this way as I don’t want to leave you with any spoilers. I can say that I did divulge a little more to my night school classmates and teacher, and let’s just say their mouths dropped open. For a realistic narrative, this is one of the scariest novels I’ve ever read. It’ll have you at the edge of your seat, marveling at this powerful story of kidnapping and survival. Check out the book trailer here:

The trailer sets the stage, and hopefully, when you see it together with my review of Lucy Christopher’s Stolen, you’ll know that there is no time to wait – now is definitely the time to buy and read this book!

← What's In My Mailbox? The June 1st Edition
Writing And The Sphere Of Influence →