What's In My Mailbox?: The June 28th Edition 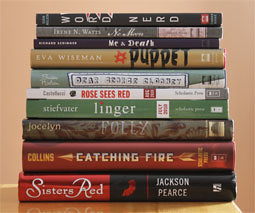 Look how shiny Sisters Red is: it left a reflection on the table!

There are times when we book reviewers feast, and times when we suffer through a review request drought. Last week, it seemed like I’d be facing the later when Monday, Tuesday, Wednesday and sad to say, even Thursday passed without one package arriving at my door. However, on Friday when I had my day off, my luck began to change when the mail person dropped off three packages, one from Scholastic Canada, one from Tundra Books, and last but definitely not least, one from Hodder Children’s Books in the UK. I may have finished high school and university, but it didn’t stop me from chattering with excitement when my bf got home from work. If you received what I did, you’d be excited too!

To say that I’m excited about The Wolves of Mercy Falls trilogy and The Hunger Games trilogy would be a huge understatement. With that in mind, imagine how I felt when I opened a package and found Linger, which I’ve been dying to read since I finished Shiver by Maggie Stiefvater a few weeks ago. Moreover, the package also contained a hardcover edition of Catching Fire. I love how the dust jacket shimmers just like Katniss did when she was introduced to the TV audience of the Hunger Games. Not only am I excited about what Suzanne Collins puts in Katniss’ way now that she’s returned to District 12, but also I’m stoked about seeing how the spark plays out between Sam and Grace burns after the first novel’s stunning conclusion. While these novels take the cake this time around because I’m already in love with the characters, there is a lot more excitement to go around…believe me!

When I was a young child, fairy tales held endless entertainment for me whether they were in book or movie format. So, I guess you can say that I had a soft spot for the first novel that Jackson Pearce has ever had published in the UK, Sisters Red, which re-imagines the Red Riding Hood story. While many other writers are coming out with their own take on the vampire legend, Pearce has pushed it aside to write a paranormal series featuring werewolves that are out to kill all the young girls in the city. Scarlett March and her sister Rosie definitely don’t follow in the footsteps of their red clocked fairy tale “sister.” This is the first novel in a new series, so I’m really excited to check it out. Oh yeah…and did I mention that my copy of SistersRed is super shiny…squeee!

Now, while I certainly love paranormal and dystopian literature, I also have a huge soft spot for historical literature of almost any period, so I’m really excited about the next four selections that wound up in my mailbox. Rose Sees Red is the newest book by Cecil Castellucci, which takes place in Cold War era New York. I’ve only ever read one other novel in this time period, The Way The Crow Flies by Ann Marie MacDonald, and I thought it was fascinating, so I’m really looking forward to this one. It’s about two neighbors, Rose and a Russian dancer named Yrena, who never speak to one another until one fateful day that sets in motion an unforgettable night in NYC.

Going back in time a little further is No Moon, Irene N. Watts tells the story of a 14-year-old nurse maid named Louisa, who has to make a choice: set sail on the Titanic as her employers requested or remain in England out of her fear of the ocean after her younger brother drowned when they were kids. In Puppet, Eva Wiseman explores a historical trial that was set in motion when a Christian servant girl goes missing from a small village in Hungary in 1882. Picking an easy scapegoat, the villagers accuse the local Jews of killing her for ritual purposes. Finally, I’m really excited that I get the chance to read Marthe Jocelyn‘s latest novel Folly as I’m interested in how she makes the events of the novel come alive from not one or two POVs, but from four different ones who’s lives become intertwined in a few moments of folly.

Finally, the last three books sent to me from Tundra Books are Me & Death by Richard Scrimger and two novels by Susin Nielsen: Word Nerd, which is up for one of the Best Canadian Read award for Indigo’s Teen Reads Awards and recently won The Red Maple Award, and Dear George Clooney: Please Marry My Mom. Scrimger’s novel is a re-imagining of another tale I love, Charles Dickens’ The Christmas Carol. Jim is a 14-year-old wannabe gangster, bully and car thief, who is run over by a car. After exploring the afterlife, much like Scrooge did in a dream, Jim’s given the chance to go back to earth with the special gift of knowing what happens when we die. I’m also really looking forward to both Susin Nielsen’s WordNerd, about an unlikely friendship that begins between 12-year-old Ambrose and an ex-con over Scrabble, and DearGeorgeClooney:PleaseMarryMyMom, which comes out in August and explores the emotional aftermath of divorce on both the parents and the children.

Wow…I’ve got a lot of reading ahead of me. What about you? Are you excited about reading any of these books? Let me know because it may just help me come up with some dynamite YA giveaways for the near future.