Book Trailers: What Not To Do 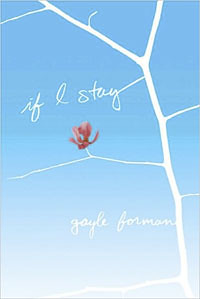 On Tuesday of this week, I asked my readers to compare the two official trailers made by Penguin Young Readers to promote Gayle Forman‘s novel, If I Stay. I received quite a few comments on my site and through Twitter where my readers mentioned not only which one they preferred, but also why. Now this might seem like a small thing, but I think that it’s really important because the opinions that each of these book lovers had, can help you develop something better than you would have the first time.

You see, Penguin created a very different finished product for the paperback version than they did for the hardcover version, and I’m trying to discern the differences (and the effect on potential readers). As I mentioned in my previous post, I did like the nostalgic feel of the original trailer, which is something I discerned through the images used in the video rather than the text used in the trailer. However, the majority of my readers who commented on the post or messaged me on Twitter preferred the second trailer (the one that was was created to promote the paperback edition on the novel). Only Robert Feagan stated that “[he] liked them both,” but even he admitted feeling that “the second [one] with breaking class is more captivating.” When asked why she preferred the second trailer to the first, another reader, Doris Elysia, said on Twitter that “Its not as wordy as the 1st trailer, it’s suspenseful & keeps me intrigued to know more about the book!”

Readers, can you think of additional points you don’t like about most book trailers, or the If I Stay ones in particular? Let me know by commenting below!

Does this mean that we have a couple of what not to do points already?!? I think so – first keep the amount of words describing the book to a minimum. Remember this is a commercial for your book, which needs to permit excitement and interest for it. Another thing to consider is the length of the trailer because, of course, the shorter it is, the less “wordy” it can seem. For example, the first trailer for If I Stay is nearly a minute long, while the second one is only 32 seconds (a length much closer to our understanding of normal advertisements). While searching the ‘Net, I found a trailer that was about 3 minutes long, and while some professionals have stated that’s an appropriate length, I find that there’s a greater chance of creating something dull and giving away the entire story instead of creating interest in your book.

Recently, I was speaking to a YA author about a trailer we’d both seen. It was a photo montage with text from the jacket cover, and she said that she didn’t like it. Why? Well, she’d seen this method of book trailers done so often, they lost the power that they might have had once. Perhaps a good-quality trailer will cost $2000 to have made professionally, but perhaps they might be able to come up with something unique that’ll grab the interest of your potential readers more than one any of your relatives can make. Remember, the book trailer is like your business card and is just as important as what the book cover looks.

Is your next book trailer doing one of these “what not to do” points? Maybe it’s time to rethink the end result. Just sayin’.

← If I Stay
YABookShelf.com Celebrates It's 100th Blog Post →