by Melissa Montovani on July 14, 2010 in Realistic Teen Fiction • 10 Comments 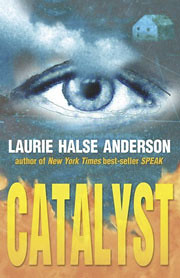 Have you ever been so stressed about something that you couldn’t sleep? Perhaps you spent your nights doing homework or housework or maybe you just found yourself tossing and turning all night long. I don’t know about you, but I certainly have and so has Kate Malone, the protagonist of Laurie Halse Anderson‘s 2002 release, Catalyst. For Kate, a high school senior, stress comes from the fact that the deadline to receive a university acceptance letter is fast approaching and she still hasn’t heard from her top choice: MIT. Gulp. While not getting into her top school shouldn’t be a big deal since she told everyone that she was accepted by her safety schools, Kate has a secret: MIT was the only school to which she applied. Double gulp. Add all this to a local house fire, which forces Kate to share her room with her long time enemy, Teri Litch, and Teri’s two-year-old brother, and you’ll have a full understanding of the main character’s situation.

After having read and loved Anderson’s debut novel Speak, I’d always intended to read more of her YA novels when I had the chance. However, my interest was peeked when I learned that Melinda Sordino the protagonist of that novel makes a cameo appearance in Catalyst. Even without knowing the premise, I knew that I had to read it, and I’m so thrilled that I did. In Kate, Anderson has created a character, who is unlike any that I’ve ever read before: a contemporary, overachieving girl, who excels in chemistry and has almost everything necessary to get into best science institution in the United States. Had the author stopped there, this novel might have been lacking that “oomph” that makes a good book a great one. If she’d stopped there, Kate would have been so wrapped up in achieving that she wouldn’t have changed and grown as a person. Lucky for us, Laurie Halse Anderson seems unable to do nothing less than be as much of an overachieving author as her character is an overachieving student.

While Speak was dark with poetic metaphor and ironic humor, Catalyst is an extended metaphor of literature as scientific experimentation. Each book heading is named after one of the states of matter and has a quotation from ARCO Everything You Need to Score High On AP Chemistry. While each of these quotations literally refer to a scientific principle, they have larger significance for the content of the novel at the point in question. (Would you expect anything less from Laurie Halse Anderson.) Beyond these aspects of the novel, you will also find that the entire structure from the chapter titles to Kate’s obsessive list making furthers the metaphor and ensures that the novel’s form matches the function of getting into Kate’s head. From where I stand, it’s impossible to argue that the author’s scientific hypothesis was anything but 100% correct: this novel is a success.

While Catalyst is a beautiful novel, it is also heartbreaking. It’s one of the few novels that really made me cry so far this year. Moreover, as I was reading it, I found myself thinking, “How do people keep going when tragedy strikes?” Anderson’s answer to this question is that the existing bonds people have with one another develop and deepen, just like the covalent bonds that hold the individual atoms together. Reading this book might take you to uncomfortable places, but it is well worth the journey.

← Are You A Canadian Teen Who Reads YA?
My Reaping Day Giveaway Winner! →