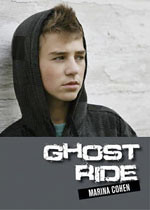 I’ve thought to myself more than once that book blogging is what I was meant to do, the thing that all my experiences so far had been working toward. Now, if I think that about blogging in general, then the long hours that I spent studying Gothic literature in particular made me feel especially skilled at writing about Marina Cohen‘s amazing ghost story, Ghost Ride. Perhaps this is also the reason that when Marina heard through Twitter that I was reading her novel that she said she was nervous. Of course, she needn’t have been worried at all because she’s created a well-crafted ghost story that shows both a great understanding and execution of the Gothic genre. Whether you’re considering this for a young teen, especially boys, or are an adult who loves things that go bump in the night, this book will satisfy.

In case you haven’t heard of GhostRide, then there are a few things that you need to know before you decide on reading it. First, this ghost story was inspired by ghost riding, or the dangerous practice of putting a car in neutral so that everyone in the car, driver included, can get up on the roof to dance as the car continues to move down the road. In Cohen’s book, the stunt performed by Cody, Javon and the main character Sam leaves one teen dead and gives rise to a bunch of mysterious notes and website comments. No one else was with the teens, and since Sam is convinced to leave the scene of the crime without reporting it, the fact that someone else KNOWS what really happened is a question that haunts Sam’s conscience almost as much as a few other eerie events.

In the opening moments of Cohen’s novel, Sam and his father have almost arrived in the new town of Sleepy Hollow, the section of Ringwood to which they’re moving. Although Sam has never set his eyes on it, his father actually grew up there, and when he gets a great deal on one of the huge, 100-year-old homes, he decides that it’s time to revisit his hometown. However, around the same time, things start getting strange, with ancient-looking bikes that turn out to be regular mountain bikes. The more Sam asks questions about these events, the crazier his father appears to become. Despite Sam’s anger at his father, perhaps they may be more alike than previously expected. Cohen has employed, in a masterful way, one of the key elements of the Gothic genre: the sins of the fathers are revisited upon their sons. Moreover, when combined with the associations of Washington Irving’s The Legend of Sleepy Hollow, one can’t help but get into the atmosphere of this novel.

After reading this novel, I have to say that I’m really looking forward to her next book, Mind Gap, which comes out in winter 2011. Check out Cohen’s writing, and I think you’ll be pleasantly surprised, and even a little spooked!