by Melissa Montovani on August 13, 2010 in YA Novelist Interviews • 26 Comments 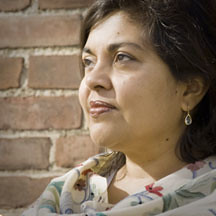 Back in July, 2010, Mitali Perkins released her first novel with two male protagonists. Two young boys on opposite sides of the conflict between the Burmese and the Karenni ethnic minority tell their stories through her in Bamboo People. When I read and reviewed this novel, I felt a strong connection with each of the voices, and think that the alternating structure allows readers to get a nuanced look at the conflict.

Today, I’m happy to share my interview with Mitali Perkins and to let my readers have the chance to ask their questions or share their comments with her. You see, all day long, she’ll be popping by YABookShelf.com to respond to any questions you might have about BambooPeople or any of her other novels. But first, check out what she said to the questions I posed….

YA Book Shelf: Were there any books that spoke to you as a child growing up and trying to bridge different countries and cultures?

Mitalit Perkins: There weren’t too many books featuring other cultures and countries when I was growing up as an immigrant kid here in the States. I love the All of a Kind of Family series by Sidney Taylor because the girls were cultural outsiders, like we were. And Emily of Deep Valley by Maud Hart Lovelace is the story of one girl reaching out to Syrian newcomers in her Minnesota town, which meant a lot to me as a newcomer and inspired me to do the same for other “foreigners.” (Full disclosure: the book is being re-issued October 2011, and HarperPerennial asked me to write the foreward!) Any book that represented and explored the feeling of being an outsider was helpful — that’s what I primarily read, whether fantasy, contemporary, or historical fiction.

YABookShelf: I’m reading more and more alternating POV books, like Bamboo People, and I wonder what it was that drew you to this form?

Perkins: I started with only one POV, Tu Reh’s, who is the Karenni character fleeing from the Burmese Army. An editor felt that the book seemed too one-sided, and made the Burmese soldiers seem like unequivocal bad guys. I added Chiko’s voice (a Burmese boy forced to fight in the Army) to make the conflict more nuanced because it’s not necessarily easy to identify real “bad guys.”

YABookShelf: You started Bamboo People 10 years ago as a picture book, and now it’s in a completely different form. Did the lengthy revision process make you more excited to finally have it out in the hands of readers than when you published books that were accepted more quickly?

Perkins: Yes! it’s so exciting. But on the other hand, I hoped that there would be peace in Burma by now and am sad that the situation has actually worsened over the past decade.

YABookShelf: The images of two soldiers, bamboo and barbed wire are featured on the cover of Bamboo People. Did you play any role in the final look of this book? What did you think when you first saw the way it turned out?

Perkins: We had some brainstorming sessions, but then I backed off and let the design team at Charlesbridge led by the talented Susan Sherman have their way. When I saw it I loved it, but at first the boys looked too young to me, so the designer widened their shoulders to match the age of the protagonists.

YABookShelf: While in the army, Chiko teaches a few other characters to read and write. How did you first learn to read? Have you ever had the pleasure of passing on this knowledge to other people, whether they were your ex-students or your sons?

Perkins: I learned to read when I was three, so I skipped right over picture books and didn’t learn to appreciate art in books until much later. I especially enjoyed savoring picture books as I read aloud to my sons through the years.

YABookShelf: Most of your novels feature strong female characters who are trying to bridge different cultures, but Bamboo People focuses on young male child soldiers and refugees. Was it more difficult to write in these new voices?

Perkins: Being the mother of sons really helps. I hope that my boys in the book sound like boys. What do you think?

YABookShelf: I completely agree with you. Both Tu Reh and Chiko seemed to speak with an authentically male voice. Your question to me makes me wonder what other readers think about the authenticity of these voices. It is subjective after all.

One of the female Karenni characters in Bamboo People, Nya Meh, experienced something unthinkable by the hands of Burmese soldiers, which is never revealed explicitly to the reader. How important is it for young women to have a safe place to discuss the traumas they experience in war?

Perkins: It’s crucial. If you have a chance to see Children Of War, you can watch expert trauma counselors try to help bring healing to young people who have experienced atrocities in conflict.

YABookShelf: Civil wars and ethnic tensions occur in many places throughout the world. Do you think that dialog between cultures, like the Burmese nd the Karenni, has the power to heal old wounds? Or do you think this may only be possible in particular situations rather than in the general one.

Perkins: Yes, dialog and peacemaking can and has happened. I have friends trying to facilitate this along the Thai-Burma border.

YABookShelf: I had a discussion on YA Book Shelf about whether authors use an outline or if they allow their subconscious to guide some actions of their characters. Do you follow a strict outline or do you let characters decide some things for themselves?

Perkins: I start with an outline, but it’s a pushover, and the characters usually run amuck.

YABookShelf: Do you have any advice for my readers who aspire to be a published author one day?

Perkins: Keep reading and writing, learn how to revise, and push through rejections. My second book, Monsoon Summer, was rejected over 20 times and finally came out 11 years after my first book! I’m glad I didn’t give up. Neither should you.

On that note, please feel free to add your questions and comments for Mitali to the comments box below. Stop back again later to see her response to your questions. Let me know what you think about this style of interview, and perhaps I’ll have some more interviews like this in the future.

26 comments for “Interview With Mitali Perkins, Author Of Bamboo People”