by Melissa Montovani on August 19, 2010 in YA Historical Literature • 11 Comments 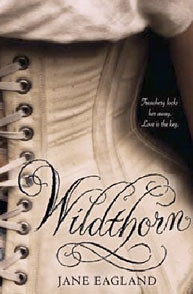 She was on her way to become a companion at the Woodville residence, but when the carriage stops, she finds herself locked away in the insane asylum known as Wildthorn Hall. First they take her clothing, even her corset. Then they take her real name, calling her Lucy Childs, and finally of course, Louisa Cosgrove suffers the worst loss of all, the disbelief by those around her of her sanity. Jane Eagland‘s thrilling debut novel (a debut in the US at least), Wildthorn, will have you reeling from the treachery and basking in the romance that just might set Louisa free.

When I first heard the premise of this neo-Victorian novel, I was ecstatic that I had the chance to read and review it because not only I am a 19th century British literature specialist, but also I pondered the incarceration of women in asylums during this period considerably as a student. If I was meant to be a YA book reviewer, then Wildthorn was a novel I was destined to examine for my site. In fact, this novel is one of the two teen reads that I’ve been most looking forward to this September. Clearly, I had great expectations about Eagland’s story, and sometimes that leads to disappointment. However, I’d like to state for the record that I absolutely loved this novel and I think that there’s a pretty good chance you will too.

To help Louisa figure out what happened, the novel shifts between her horrifying present and her memories of the years and months leading up to her incarceration. In this way, readers get insight into both Louisa’s character/delusion and gain back story that helps us piece together the who, how and why of Louisa’s betrayal, or at least what she envisions as one.  You see, as with any first person narration, Louisa is an unreliable narrator, but in this instance, she’s doubly so because there is a chance that Louisa really IS Lucy Childs and that she really is crazy. In this tightly woven YA book, many of the plot devices and incidents have two possibilities, but as the narrative progresses, you’ll come to side one way or the other.

While I’m not a historian, Eagland portrays an accurate late-19th century setting that follows issues of the sick bed, female “insanity” and the desires of women to strive for more of life than marriage and children. Don’t expect that the narrative will be told through the eyes of a typical heroine who focuses her energy on learning the social graces and putting everyone, especially her children, before herself. Eagland paints a strong, modern female character, who has the brains and willingness to be a trained physician, and who is willing to fight for what she wants, even when she faces great censure from those in the medical profession at large and within her own family. Louisa’s strength of character and her desire to break free from the a “woman’s place” shows an individuality with which many high school students and adults alike will identify. Wildthorn proves again and again that historical narratives have a definite place in today’s world.

Just as today’s women strive to have it all – a rewarding career and a love like no other – Louisa faces these dilemmas as well. However, part of her journey involves a growing awareness that her sexuality is different from that of most men and women in her time. Is this why she is betrayed and ends up in Wildthorn Hall? Or is being a modern woman who challenges the status quo too much for those in the medical institution and the community at large to handle?

Whatever the answer to the questions above and others, one thing is for sure, you’ll be glad that I recommended Wildthorn to you. When you take the time to read Eagland’s brilliant American debut novel, you’ll see what I mean.