by Melissa Montovani on September 21, 2010 in Process of YA Novel Writing 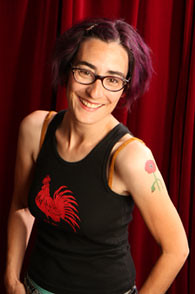 If you read YA Book Shelf regularly, then you’ll know that not only did I post a review of Cecil Castellucci‘s recent release, Rose Sees Red, but also that I really enjoyed this novel. I happen to think that it’ll appeal to a lot of young girls and adults, so if you haven’t read it yet, go out and get it. In the meantime, perhaps this guest post about friendship across political lines during the Cold War by Cecil Castellucci will whet your appetite. Enjoy!

It’s no secret that Rose Sees Red is the closest book to my own high school experience. Rose lives in my actual old house in the Bronx (Riverdale), which faces a white apartment building that in the 80s, was a Soviet Compound. There really was a neighbor that lived next door to me, who was from Kiev, her name was Nastja, but we were not friends. At 11, she was much too young for the 15-year-old me. But I liked that she was different, and it was clear that if we had been the same age, and not from countries that were hating on each other, (her parents were skittish about our acquaintanceship) that we would be friends. She was smart, and she was funny. She was, I think, happy to have an American acquaintance like me, and I was just as happy to have a Soviet acquaintance like her. We’d sit in the yard. I’d ask her about her Barbies. She’d ask me about my high school. I’d tell her about my theater classes. I think she was taking music lesson and math that that was harder than anything.

One day, in summer, we sat in our joint garden with two little boys that were visiting from the compound. The boys only spoke Russian, but I decided that I would make up a fairytale to entertain us. As I weaved the story, Nastja would translate. Looking back, I realize that I myself must have looked like a fairy to the two little boys, sitting there in the back garden, with green hair and most likely wearing a vintage dress. But what I remember most about the moment is that Nastja and I were in it together. We were going to tell a story to these boys that would blow their mind. And for one moment, language didn’t matter, or politics, or age difference. The only thing that mattered was the story. We were four young people in a garden, not caring about the politics of our parents or our government. Back then, I already knew that I wanted to be a storyteller, but it wasn’t yet clear how it would come about. Would I be a filmmaker? Playwright? Author? Actress? Who cared? Not me. But one thing I did know was that the white apartment building, the cold war, the little girl next door and me were all going to inform some kind of narrative that I would tell one day. Eventually, Nastja went back to Kiev, and I moved away from that apartment. I went to college. The Berlin wall fell. The cold war ended. I moved to Canada, then California. I played in a band. I started writing books. And one day, it was time. I took that story out of the box, dusted it off and had a look to see what was there. I thought about my life in NYC in the early 80s.

In 1982, on June 12th, the biggest No Nukes rally in American history took place in central park.

I was about to start the High School of Performing Arts, for Theater, which at the time was in Times Square.

The cold war was in full swing.

The doomsday clock had just moved to 2 minutes to midnight.

I thought that in those things, mixed up and thrown around, there was a story that I would like to tell. 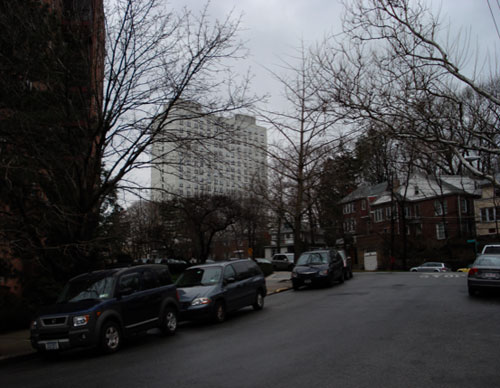 The white apartment building is the Soviet Compound mentioned in Rose Sees Red as seen from Cecil's old house.

Recently, a friend of mine from high school read the book. She confided in me that she was happy to see that nothing in the book was real, but that it was all somehow exactly familiar. She had been worried that the book would be a Roman a Clef. You know, where a story describes real life under the façade of being a fiction. That everyone from high school would be there. That it would potentially be embarrassing, or painfully true. That everyone and everything would be immediately recognizable as someone or some situation that was real. But that’s not what Rose Sees Red is at all. It is pure fiction. Sure, Rose lives at my old house and goes to my old high school, but there really is not much more that we have in common. And in a way, it’s almost like because of that it’s more true. And I read it and I think, “Yeah, that is kind of how it felt back then. That’s how I remember it.” Because it is 1980s New York. It’s my love letter to that time, and it hits that nostalgic part inside of me. But this is very much Rose and Yrena’s story. It’s about how you make that one special friend who changes everything and makes you awake to the whole wide world and to your own precious heart.

← What's In My Mailbox?: The September 20th Edition
The Replacement Book Trailers →