Confessions Of The Sullivan Sisters

by Melissa Montovani on September 15, 2010 in Realistic Teen Fiction • 14 Comments 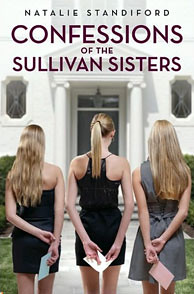 Every Sullivan sister has a secret that they’ve been shielding from the eyes of their family and the blue blood Baltimore society. On Christmas Day, however, their rich and impervious grandmother gathers the entire Sullivan clan and tells them that not only that she is dying, but also that she’s taken the entire family out of the will. Someone among them has offended her deeply, and only if she receives a signed confession by New Years Eve from the offending party will she even consider reinstating them. And thus, the confessions begin. Some are filled with love or hate. Others speak of life and death. One thing is for sure – Confessions Of The Sullivan Sisters is a quirky book that will do more than merely entertain your desire for salacious gossip.

Dear readers, I have a confession to make to each and every one of you. When I first saw the concept and cover for ConfessionsOfTheSullivanSisters by Natalie Standiford, I wasn’t really interested. I thought that a story about blue bloods wasn’t for me. The possibility that the Sullivan Sisters might live out their lives without a trust fund didn’t seem to be an entirely appealing to someone like myself, who has no hope (or desire) of living off the money of previous generations. Whereas the cover of Standiford’s debut novel, How To Say Goodbye In Robot, grabbed me, I felt that the design of the new book was lacking, and *gasp* I judged it before I even had the chance to crack the book open. So, yeah, there, I said it, and I’m sincerely repentant (as much as Norrie, more than Jane, but not quite as overcome as Sassy). Perhaps, you’ll forgive me and allow me to forgive myself one day for my prejudicial thoughts.

Now, some of you might have unsubstantiated prejudices circling around your head about this novel too. Before you need to give an equally sincere (and possibly embarrassing apology) to all of your readers, please read this review. While in general I’m far from a reluctant reader, I clearly was reluctant about this book, but I was so wrong! From the second sentence – literally – I was drawn into the quirky world of the Sullivan family that Standiford has painted with a warm and playfully mischievous affection. I never would have imagined someone, let alone six children, referring to their father as “Daddy-o” and their grandmother as “Almighty,” except perhaps as a joke, but there it was. I was in love from the first glimpse into the world, and I have a strong suspicion that you will be too.

Not only are the voices charming, but the novel’s structure is just as intelligently handled. Two short, third-person omniscient narrated chapters envelop the remaining, epistolary ones in a clever mirroring of form and function. Each of the girls ostensibly close up their letters/confessions in an envelope, sealed for Almighty’s eyes only, but the narrator lets readers “tear into” the novel’s ‘structural envelope.’ Norrie is the eldest and first sister to get the undivided attention of Almighty and readers alike, so the subsequent sisters both get less time to confess their stories. Perhaps Norrie just has more to confess, but the overlapping explanations of, occasionally, the same scenes from a different sister’s perspective suggests that not only did some content not need to be repeated each time, but also the same scenes weren’t significant to each of the confessions.

From the hilarious personalities to the clever structure, Standiford has put together a solid book that is sure to garner acclaim from both critics and the book community at large. Take my advice – pick up Confessions Of The Sullivan Sisters now.

14 comments for “Confessions Of The Sullivan Sisters”