by Melissa Montovani on September 8, 2010 in Paranormal Teen Fiction • 0 Comments 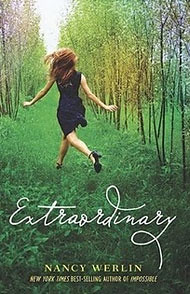 Phoebe Rothschild met Mallory in the seventh grade at a time when she is first beginning to develop a sense of self and independence. At a time when she is willing to ditch the catty group of friends that she’d always hung around with, Mallory’s presence allows her to see a way out and she takes it without ever looking back. Over the course of four years, they become inseparable…almost like sisters, but when it seems like nothing can break apart the bond they share, someone else – Mallory’s mysterious older brother Ryland – comes between them and makes her question not only her best friend, but also herself. What is it that makes Phoebe so attracted to them…does she just see something special in them or are they faeries who want something from her and are doing everything in their power to get it from her? If you have an interest in the paranormal but prefer when it makes you think, then Extraordinary will draw you in and make you question your own place in the world.

Extraordinary is an extraordinary example of the fact that YA paranormal novels can, and in some cases should, go beyond the typical limits of the genre to the truly literary. While some novels just throw the supernatural into a real life setting and add various obstacles to bring readers a long for the ride, Nancy Werlin proves that paranormal books don’t have to be guilty pleasures consumed only when no one is looking. In fact, by reading this novel, you’ll see that the thoroughly entertaining can cause teen readers to deal with their own feelings of uncertainty and inadequacy as Phoebe does the same. By providing an example of someone who takes the plunge herself, Phoebe might very well be a positive influence on her young adult fans and a breath of fresh air to adult readers as well.

From the crisp and vibrant look of the actual book cover to the structure which weaves back and forth between Mallory and Ryland conversing with the Faeries Queen, the otherworldly aspect of this novel is consistently brought to the foreground. You won’t be able to forget that there is something magical at work here, but unlike the soliloquies which all the reader and/or listener to know what is about to happen before the main character, Werlin manages to cloak her novel in a layer of mystery that continues to surprise to the very end. You won’t get any spoilers here, but I can promise that this read was well worth the effort for me and might end with you thinking the same thing. While I normally devour new books, this novel begs to be savored and enjoyed, so I found myself purposefully reading at a slower pace than normal.

If I had to choose something that I didn’t really like about the novel, however, I think that I could manage this as well. While my review is overwhelmingly positive, I didn’t like how Phoebe reacts when she realizes that Mallory and Ryland are faeries and that they’d been controlling her. While the reaction is understandable, I would have believed it more had we seen glimpses of this reaction earlier on in the novel. Despite this small point, I still think that Extraordinary should be one of your must reads for September.