The Knife Of Never Letting Go

by Melissa Montovani on September 30, 2010 in Dystopian YA Fiction • 6 Comments 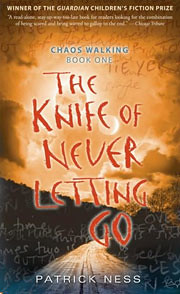 Prentisstown is a town like no other. Why? Well, there are two reasons. First, there are no women. Second, all of the men and the one remaining boy, Todd Hewitt, can hear one another’s thoughts in a constant stream of consciousness, something that can only be described as Noise. When Todd and his dog Manchee stumble upon an unexplainable pocket of silence, they realize that a terrible secret has been hidden from them – one that is so awful that they’ll need to run for their lives. The Knife Of Never Letting Go is a book that will keep you at the edge of your seat the whole way through as Todd learns not only whether it’s possible to run from pursuers who are constantly connected to his every thought, but also what it means to be a man.

Through no fault of his own, Todd is illiterate. As I already alluded to, he lives in a world characterized by the constant noise of all the men and animals around him. Both of these factors lead to certain structural decisions on Patrick Ness’ part that will change the way you read this novel – that’s just inevitable. First, Todd’s spoken and silent thoughts are written phonetically, so it might take some time to understand him at first unless you’re already accustomed to this style of writing. While his illiteracy is important at different points throughout the story, it isn’t something that would be constantly in your mind without the phonetic structure. Second, most of the “Noise” that enters Todd’s mind through the people and animal surrounding him is set in a different font (or fonts) from that of the majority of the book, which gives another visual reminder to the reader of the constraints of this society. Both of these visual clues depict the postmodern form of the novel and simultaneously give the reader the best possible ‘in’ to the world and its constraints, which makes it easier to identify with Todd.

And identify with him I did. My ability to identify with Todd is possibly one of the most remarkable things about this book because everything that is normal for him (from the constant noise and the doom and gloom preaching from the local pastor) is both horrifying and incredibly antithetical to most 21st century lives. When he identifies a bubble of silence early on from some living creature, something that we experience all the time, he is horrified by it and assumes anything that silent must be dumb and empty. Imagine if someone thought that about you? While these things (and more) could easily make us resist the urge to believe in the character and his experience, it doesn’t because Ness paints Todd in a sympathetic way. Just as we can’t do anything about our inability to read the thoughts of others and transmit our own, Todd can’t do anything about how he experiences the world, whether he’d like to or not.

Many Dystopian novels force us to ask questions and to think, very hard, about the answers. The KnifeOfNeverLettingGo is a world that can only be described as “chaos walking”, so clearly it forces the reader to ask what would they do if they couldn’t easily protect their secret thoughts. What if your daily thoughts could be read without any difficulty by every sentient being around you? How would you maintain a sense of privacy in a world that is anything but private? At the same time, it makes you come to terms with how you experience those who are different than you? If you can’t communicate in the same way, do you assume that the ‘other’ is unintelligent? Do you believe how the media and written history portrays the ‘other’ or do you realize that the victor’s history often over simplifies what actually happened? Finally, how does one define manhood? These and many other questions will inevitably be awakened by this book, are you ready?

6 comments for “The Knife Of Never Letting Go”