Interview With Erick Setiawan, Author Of The Novel Of Bees And Mist

by Melissa Montovani on November 11, 2010 in YA Novelist Interviews • 2 Comments 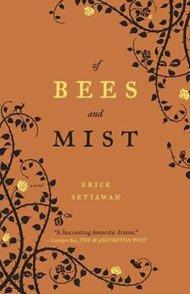 Not only did I have the pleasure to invite Erick Setiawan to write a guest post, but also he agreed to answer some of my questions about Chinese culture, his novel Of Bees And Mist, and even about his experience immigrating to the United States as a teen. I hope you enjoy this interview as much as I loved conducting it.

Erick Setiawan: The household dynamics in the book are very Chinese, I think. In a traditional Chinese family, the daughter-in-law was obligated to serve her mother-in-law and perform whatever duty was asked of her. In Meridia’s world, the custom isn’t enforced all the way, but there is still the expectation that she has to defer to Eva before making a decision. Given that Meridia is strong-willed and very independent, you can imagine how she will not just sit quietly and let Eva steamroll her.

The other thing that is also very Chinese is Daniel’s relationship with his parents. Some Western readers are irritated with Daniel because they thinkhe should stick up for Meridia more and earlier. But from a Chinese point of view, Daniel is in a very difficult position. Traditions dictate that he put his parents before his wife (filial piety is one of the major Confucian tenants), so in order to defend Meridia in any way, Daniel has to go against everything he knows and holds dear. This is no mean feat for any man or woman to accomplish.

YABookShelf: In a childhood filled with anxiety and tension cause b the anti-Chinese sentiment in Indonesia, you turned to books to escape. What were your favorite novels and authors as a child and teen?

ES: I read a lot of Enid Blyton and the Tintin comic books when I was a child. I was also drawn to Indonesian folktales, especially the Bharatayudha, which is a retelling of the epic war between Pandavas and Kauravas as originally depicted in the Mahabharata. As a teen, I because obsessed with Agatha Christie and the whole detective genre, and to this day, I always make room for a good mystery.

YABookShelf: Human relationships — whether between husbands and wives, parents and children, siblings, or newlyweds and in-laws — are fraught with misunderstandings and disagreements, or in the case of your characters, all out battles. Other than your own family’s experience, what is it about the conflict between, in particular, daughter-in-laws and mother-in-laws that became such fruitful exploration for you as a writer?

ES: I think conflicts between women are infinitely more interesting than conflicts between men. Most women don’t resort to physical violence, so when it comes to battling it out, they have to reply on smarts and strategy, and become resourceful in other ways. To me, this is more fascinating than a fistfight in a bar. The daughter-in-law/mother-in-law aspect came from watching my mother outwitting and outfoxing my grandmother, her mother-in-law, over the years. I grew up watching these two strong, opinionated women butt heads with each other, and I could see how their frequent clashes affected the entire family.

While some of the characters in Of Bees And Mist have biblical names, others have names that aren’t very popular in North America. How did you go about choosing the names of the female characters, like Meridia, Malin, Permony, and Ravenna? What about those with biblical names?

ES: I didn’t consciously decide to name my characters this way or that way. I just chose names that I thought were right for them. Meridia, Malin, Permony, and Ravenna are not typical Indonesian names, so I don’t know where they came from, but I knew they were the right names for these women. As for the men, I didn’t realize that I was picking their names from the Bible until someone pointed it out to me. In my mind, I probably was going for the whole patriarchal angle, but of course it turned out to be ironic, since the women in the book have the upper hand and often succeed in getting the men to do what they want.

YABookShelf: One thing that struck me early on is that although Elias clearly favors Permony, he does nothing to protect her from Eva’s tormenting. Is he trying to avoid “the bees” or is there something more to his actions?

ES: Elias doesn’t like conflicts—he just likes to be left alone—so not wanting to anger Eva’s bees is definitely a big part of it. But I’ve also seen many men behave like Elias in their marriage. They wash their hands of domestic matters, leaving everything (including how to bring up the kids) to their wives, and just focusing on bringing home the bacon. It is a testament to Eva’s skill that she’s got Elias exactly where she wants him. In a sense, she’s programmed him not to respond even when something he holds dear is at stake. There is a saying that’s perhaps more true in some cultures than in others, about a man being king outside the house, but a woman is queen inside it.

YABookShelf: What was the most challenging scene for you to write in Of Bees And Mist?

ES: There were so many of them. The birth scenes were difficult, not just because I had to put my characters through a great deal of pain, but also because as a man, I haven’t had to give birth myself. The last three chapters were difficult to write because I knew everything had to come together, and at the same time, I had to keep the emotional momentum going. The ending was difficult as well, because it had to be the right ending for the characters, and I went through dozens of alternatives before hitting on the correct one.

YABookShelf: Many North American teens aren’t completely ready to move away to start college, but you moved halfway across the world. What was the most surprising thing you experienced when you first immigrated to the US? The most rewarding thing?

The most rewarding thing was having all that freedom suddenly staring me in the face. I never felt at ease in Indonesia, it never felt like home, but when I got to America, I realized that I could do anything I wanted here. It was exhilarating, a great big gulp of fresh air.

YABookShelf: In the guest post you wrote for my site, you mentioned genderwo and kuntil anak are two of the demons with which parents in Indonesia would threaten their children when you were growing up. Can you tell my readers more about these demons and what they represent to the culture?

ES: A genderwo is a dark, monkey-like giant who is also incredibly hairy. He tends to dwell in forests, small villages, and other deserted places. His favorite hobby is to play tricks on women: touching their bodies while they sleep, removing their clothes, tempting them while their husbands are away. A genderwo is known to have an insatiable sex drie. When a woman is possessed by him, she will hump anything within sight. He also likes to frighten children, and is best avoided after dark.

A kuntil anak is the ultimate femme fatale in Indonesian ghost mythology. Allegedly, she died during childbirth after being mistreated by her family, and arose from the grave to seek vengeance. But she doesn’t stop there. Her favorite hobby is to disguise herself as a beautiful young woman to attract a male victim. Once he succumbs to her charm, she kills him by devouring his organs (sometimes his sexual organs). Probably the most well-known and feared of all Indonesian ghosts, a kuntil anak also kidnaps children from time to time. Mention her name and most little kids will give you an uneasy look.

Indonesia, as you can imagine, is a very mystical country, ripe with ghosts. It isn’t hard to find people there who will tell you that they have seen this or that spirit in action. In Bali, entire areas are reputed to shut down, all lights out, whenever there is a war between two witch doctors. Scary stuff, and tawdry enough to stoke a novelist’s imagination, to say the least.

YABookShelf: Over the course of the novel, Meridia likes a few rash decision and perhaps she wishes that she could do over a few select moments. What moment would Meridia change? If you could go back in time and do something over, what (if anything) would you change in your own life?

ES: I don’t think Meridia would regret anything, and that is one quality that is both alluring and maddening about her. She’s the kind of woman who only looks forward, never backward. Once she makes a decision, she sticks with it, for better or worse. In contrast, her mother, Ravenna, who is also a strong character in her own right, dwells in regrets and things of the past, so that she lives in a kind of prison. As to what I would change in my own life…there are so many! Little things, mostly, but they nag at me. I wish I had eaten that extra slice of pizza last night. I wish I had gotten regular milk instead of soy milk at the grocery store. I wish I had used this word and not that word on page 87. Given half the chance, I think Meridia would very much like to grab me and beat some sense into me.

YABookShelf: Images that either link or conflate birth and death are considerable in your novel. However, the image that I’m most concerned with is the one that links the death of a woman’s uterus with the death of one’s purpose and meaning. Why is the ability to give life of such great importance to your characters?

ES: I came from a culture where a woman’s worth was derived from her ability to bring children (sons, in many cases) into the world. With modernization and progress and feminism, it isn’t so pronounced anymore, but before, a woman was often considered incomplete or even defective if she wasn’t also a mother. In the book, I wanted Meridia to strike back at this convention. She is still very much a woman (if not more so, regardless of what Eva believes) even after she is not longer able to bear children. Her determination to prosper and carve out a new path for herself despite the odds is one of the things I admire about her.

YABookShelf: Thanks so much for your thoughtful responses to my questions, Erick. It was a real pleasure to have you stop by my site.

What did you think of this interview? Did it make you interested in reading Of Bees And Mist? I can tell you that you’ll enjoy reading it if you give it a chance.

← Ghosts Of The East, Demons Of The West
A Few Of My Favorite Things →

2 comments for “Interview With Erick Setiawan, Author Of The Novel Of Bees And Mist”