by Melissa Montovani on November 26, 2010 in Paranormal Teen Fiction • 0 Comments 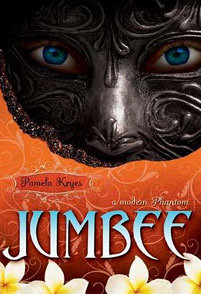 Determined to step out from the shadow of her late father, a famed actor, Esti Legard convinces her mother to move them to Cariba to attend a theater school. However, on an island where superstition rules, it doesn’t seem like she can get away from the darkness. While practicing her lines in the dark theater, an alluring voice – known only as Alan – becomes her drama tutor, in broad daylight, she struggles with her attraction to the local bad boy, Rafe. When shocking accidents and mysterious illnesses begin happening on the set of Romeo And Juliet, however, the islanders are convinced that not only is the theater haunted by a jumbee, but also that Esti has fallen under his spell. Is Alan really a ghost? What will it cost her and her loved ones to learn the truth in Pamela Keyes debut novel, The Jumbee?

For those of you who have previously read or seen a version of The Phantom of the Opera performed on the stage before, take a moment to remember it and you might have some idea of what to expect from this novel. Although updated with a different setting and context – the main character is an actor, not a musician, I’m not surprised that it’s being haralded as a modern take on this tale with a Carribbean twist. Whether it was from the heady sea air that you can almost taste while you read TheJumbee or the frequent references to the Shakespearean oeuvre that play a role in the narrative, I, for one, fell in love with this novel very early on, and I have a feeling that those who like Shakespeare and paranormal romance novels will find that this one has a magnetic pull that will definitely draw you in.

Reading Keyes’ novel made me fall in love with Shakespeare’s signature iambic pentameter style all over again, in part because Esti and Alan have such reverence for his plays. While their love for Shakespearean language and their ability to bring the emotions of the plays to life helped me see Shakespeare again, as if for the first time, it had significance to the characters as well. Their mutual appreciation and understanding of the plays brings them together in a way that Esti can’t experience with anyone else, least of all her other potentially, significant other, Rafe.

Esti’s relationship with Alan is mostly intellectual because of the knowledge they share and the his refusal to allow her to see or touch him. With Rafe, on the other hand, readers can expect to find that Esti has both a physical attraction and a history: they were childhood friends and she goes by a nickname that he gave her years ago. The fact that she cares for and experiences her attraction to each of the potential boyfriends in a different way explains a lot of the push and pull factors that draw her at times in one direction and at others, another.

Other than the language and convincingly complicated romance plot, my favorite aspect of this novel was the intensely suspenseful and mysterious supernatural plot. Keyes does a great job of using the islanders’ superstition and Alan’s self-imposed physical distance between himself and Esti to consistently cast doubt on whether the voice that only she can hear in the theater is really there or if it’s just the presence of a jumbee, a type of ghost said to haunt Cariba by the locals. Whatever is the truth, it is immediately apparent that Alan jumbee or not) would do anything – and I mean anything – to help further Esti’s career at the expense of others. But would he also endanger Esti herself?

Keyes consistently builds the passion and the suspense, so keep in mind that you might not be able to rest until you’ve finished just “one more chapter.” If that doesn’t bother you (and if you read as many YA novels as I do, then I’m sure it wouldn’t), then check out this novel cause I have a feeling that you’ll like it as much as I did.