by Melissa Montovani on December 1, 2010 in Realistic Teen Fiction • 5 Comments 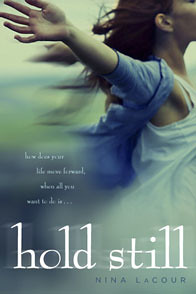 Ingrid promised to go wherever Caitlin goes, but by dawn, Ingrid is dead and Caitlin feels utterly alone. All of a sudden, Caitlin finds herself struggling to cope with a completely unfamiliar world, a world in which the art, music, laughter, and joy she’d experienced with her best friend has shifted in a way that she never imagined. When she finds a journal that Ingrid left behind, Caitlin not only learns a completely different side of her friend, but also she finds a way to connect with new friends, find first love, and live with the loss of someone she’ll never forget. Nina LaCour‘s stunning novel was nominated for the William C. Morris YA Debut Award (2010), and while it didn’t end up winning, readers of all ages will come away from this novel with hope and a great appreciation of the author’s writing abilities.

I first heard about Hold Still months ago, and while I wanted to read it, I hesitated, thinking that I wasn’t quite ready to read such an emotional book. To be sure, there are difficult moments, but LaCour’s narrative isn’t depressing. Rather she takes a breath-taking portrait and imbues it with love, life, and above all, hope that life can continue, even after a teen, like Caitlin, faces the debilitating and tragic loss of her friend to depression and suicide. The way LaCour shows Caitlin at moments of denial, anger toward other students and teachers, and guilt as well as her eventual reintegration with her peer group and acceptance of her loss demonstrates the author’s acute sensitivity to and understanding of Caitlin’s experience. Although all individuals handle grief differently, this novel and its poignant characterization of loss will speak to teens, who are facing this experience, and adults, who want to speak with their teens about suicide without a doubt.

One of the most important themes in HoldStill is the ability of survivors of suicide to use artistic expression in all its forms to get through their pain. Time after time, Caitlin locks herself in the backseat of her car and listens to a mix tape that Ingrid’s brother made for her long before Ingrid’s death. They’re songs about love, loss, friendship, and longing, they’re songs about the type of experiences that Caitlin is going through in the weeks and months after her best friend’s suicide. At other times, she demonstrates her anger and rage by purposefully photographing the ugliest thing she can imagine, by photographing a moving car and calling it a still life. LaCour establishes that Caitlin can not only resist  the expectations of others, but also that she has the ability to move beyond the loss, the pain, even as she still remembers and commemorates her friend. By offering this portrait of someone who is suffering, but finally, is able to express her feelings through art, LaCour shows readers that that there are other methods of dealing with emotional pain.

From the moment I began this novel, I was enchanted by the sophisticated and eloquent writing style, by her use of parallel structure and poetic imagery. However, the more I read, the more enamored I became. I can only imagine that you will feel the same way. Hold Still is a brilliant debut novel, and I for one, can’t wait until LaCour’s next book comes out…whenever that might be.