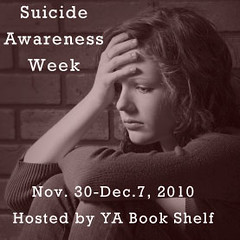 Over the last week or so, I’ve had the opportunity and pleasure of promoting teen depression and suicide awareness to my readers. Many of you have left comments: Sometimes about your own experiences or those of people you knew. It definitely took some courage, and I really appreciate that you were willing to be part of this really important conversation now and hopefully, you’ll continue to do so in the future.

In addition, Lesley Anne Cowan, Matt Beam, and Nina LaCour were able to come up with great guest post pieces. Lesley’s experience teaching and writing about at-risk teens is invaluable for speaking about the way teens hide the truth of their feelings from friends, peers, and adults as well as the need for parents to be involved in the recovery process. Similarly, Matt Beam’s post really touched me, not only because he was honest about his own experience with depression and suicidal thoughts as a teen, but also because he spoke to common stereotypes about the type of people who seriously think about suicide. As he said, had he allowed the stress and pressure of being a teen get the better of him, his best friend would probably have said, “no one saw it coming.” Finally, Nina LaCour wrote about her personal experience of having a classmate commit suicide when she was a teen, and how the questions she was mulling over about him found their way into her debut novel, Hold Still. Each of these posts are different from one another, reflecting not only the authors’ distinct writing styles, but also the different types of teens and adults who’ll be touched by their words. Here’s a big thank you to all the authors who took the time to contribute to this important awareness week.

Now some of you may have also followed along with the giveaway and reviews I posted already, so you might have some idea of books that fit the theme, which I would recommend. However, I’ve done a bit of research along with the help of some of my Twitter friends. Check out this list of books about suicidal teens and/or the suicide of a friend or family member:

* Books in bold are ones I’ve already read. (Edited to include more books read from the original list since it was initially published.)

If you know of any other books about teen depression and suicide or suicide of family members, please feel free to leave the suggestions in the comment box below. Also if you’ve read any of the one’s that aren’t bolded yet, please let me know what you thought of them. I want some more recommendations about which ones I should read first, etc. Thanks again to everyone who participated and enjoyed Suicide Awareness Week – your help made it even better than I could’ve imagined.

← "Did This Happen To You?": Nina LaCour & The Underlying Questions
Great Gift Ideas: Get A Wireless Kobo For The Big Reader →