by Melissa Montovani on January 6, 2011 in Dystopian YA Fiction • 6 Comments 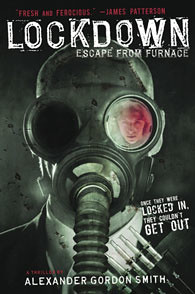 Furnace Penitentiary is the most formidable and secure prison for young offenders that has ever been built. No wonder since it’s buried one mile beneath the earth’s surface. When Alex Sawyer (yes, the connection to Tom Sawyer wasn’t lost on me either) is framed for murder, his fate is sealed up in this juvenile facility. As readers become further immersed in this thrilling boy novel, however, they’ll see that a prison sentence is the least of Alex’s worries. Alexander Gordon Smith paints a chilling environment where life, death and other forms of existence are equally plausible and where cruel and unusual punishments are the norm.

Readers of Lockdown will find themselves immersed in a world, where the penal system for young offenders has been completely revamped. Gone are the days when teen crimes see a slap on the wrist or lockup for a year or two before their rap sheet is sealed at the age of 18. Gone are the days when the idea of life behind bars for a 14-year-old boy, like Alex, would be completely ridiculous. Despite the feeling that life sentences for teens are completely horrifying, this novel (and the rest of the Escape From Furnace series I suspect) is completely realistic. We’ve all seen evidence that citizens are willing to give up some personal freedoms for themselves and others when they’re afraid; Smith’s series takes this concept to the furthest reaches imaginable. And let’s face it, no one wants an improbable and unbelievable experience to be the concept behind a dystopian novel.

Not only does this fast-paced novel force us to question what we consider acceptable punishments for juvenile delinquents, but also it makes readers take a second look at the type of people with which we can sympathize. Much like his namesake, Tom Sawyer, Alex isn’t what anyone would consider a good kid. Alex is a bully and a thief, and had the events that led to him being framed for murder never happened, it’s quite possible that he would’ve been headed in that direction sooner or later. The reader’s ability to sympathize with him and many of the novel’s other characters speaks volumes about the author’s ability to ask tough questions of his audience. Questions like, does a troubled past mean that reform is impossible? Does it mean that his basic human right to safety and security should be denied him? While these questions and issues are pretty heavy, they aren’t beyond a teen boy’s ability to ponder.

With adventure, fights between inmates, and scary happenings at every turn, teen readers, especially boys, will really get into this story. Even boys who aren’t so keen on reading will devour this novel, and won’t be able to wait for the next and subsequent installments of this series. What I appreciated and what I think will be equally refreshing to the audience of this novel, is that all the danger in Furnace doesn’t just surround Alex. Nightmarish things don’t just happen to Alex’s friends and the other inmates of this prison, leaving Alex safe. Rather, he’s often in a position where his safety is in question, and if he escapes narrowly, it is always a relief that we’d never have seen coming.

For teen boys, in particular, who want a bit of a scare and are interested in the question of freedom, then Lockdown should be in their to be read pile. However, I happen to think that everyone from their teen years and up will get into this story just like I did.

← How Does YA Lit Inspire You?
Girl On The Other Side →