by Melissa Montovani on January 4, 2011 in YA Historical Literature • 5 Comments 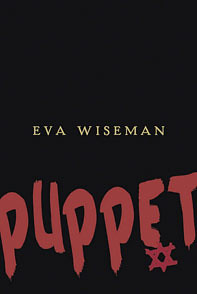 In 1882, a servant named Esther goes missing from her small Hungarian village. Assuming that there must be someone at fault, the Hungarian villagers start circulating lies – the “blood libel” – that Jews kill Christian children as part of their springtime rituals. In this unforgettable story, Eva Wiseman draws upon a real trial in Hungary that caused outrage throughout the world in 1883 in part because Morris Scharf, son of one of the accused, was the key witness against them. Written from the perspective of Julie, a friend of the missing girl, Puppet is a novel that examines not only the worst, but also the best that human nature has to offer.

When I first heard about this novel, I was immediately intrigued by it, but unfortunately, I was unable to read it until fairly recently. Even though it was published in 2009, I’m really glad that I made time for it now because unlike a few other novels that I’ve read, my expectations of this one weren’t disappointed. In fact, I was surprised (in a good way) by Julie’s ability to see beyond the lies constantly being spewed by most of the adults in her life just as much as I was disgusted by the the outright bigotry of many of the other characters. To think that we live in a world where hatred like that represented in this book could ever exist is a really sad thing, but when adults attempt to perpetuate these disturbing beliefs in the next generation, it’s absolutely frightening. While I’ve always believed that in general, seeing this play out in the context of Wiseman’s novel made it so much more real.

Was Julie alone in her conviction that the Jews of the town Tisza-Eszlar, Hungary were completely innocent? No, not at all, but those who spoke on behalf of the imprisoned Jews were few and far between. Julie’s mother planted the seed of justice in Julie’s mind, but Wiseman’s narrative is composed in such a way that the reader becomes one of the most steadfast supporters of the main character. Does that make Julie a strong female role model for teen girls? I think so, and her strength of character becomes even more apparent when compared to Morris Scharf. (You’ll understand what I mean when you’ve read the novel yourself.)

If my opinion is of any consequence, then I think this novel will speak to many teens. Whether they’re interested in history, social justice, or just love a great story, you can rest assured that this novel will touch teens and stay with them for a long time to come. Now I’ll leave finding out who demonstrates the best and worst in human nature up to you!

← Win The Jumbee With The Reading Resolutions Giveaway Hop
How Does YA Lit Inspire You? →