by Melissa Montovani on January 18, 2011 in Dystopian YA Fiction • 1 Comment 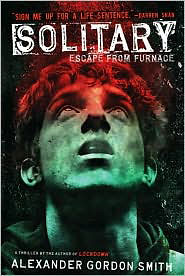 In the stunning conclusion to Lockdown , Alex Sawyer, Zee, Toby, and Gary jump from the passage way they exploded into a raging river. Unfortunately, their means of escape and freedom ends them right back in the clutches of the Warden. Rather than send them back to live among the general population of Furnace Penitentiary, however, the Warden decides that solitary is where they’ll be spending their days for a little while. Solitary brings Alex face-to-face with another series of nightmares and struggles to not allow their new conditions to overwhelm them. If another escape will ever be possible, they must first survive their new nightmarish existence.

If you read my review of Lockdown, then you know that I really loved it. I’m happy to report that a lot of the interesting aspects of the first dystopian YA novel in the series show up again in the second. In fact, if you needed a reminder that Alex isn’t the typical good guy type of hero, then you wouldn’t have to look far: Alex speaks directly to the reader to this effect early on in Alexander Gordon Smith‘s novel. Moreover, the creepy feeling that he gets from the Warden and his terror of both the dogs, the wheezers and the blacksuits follow him as he (and the readers) embarks on his second journey.

However, if you were to take away from this review that Solitary is in many ways the same book as it’s predecessor, then I would have led you astray somehow. And we just can’t have that. Solitary confinement at Furnace – even with a buddy or two nearby – really limits the possibility of social interaction. While there are a lot of moments when Alex can talk with other inmates through coded messages or other means, it felt to me as though he was on his own a lot. While this is to be expected given the concept of the novel, it made me feel, in general, that this is less exciting than the first book was. At times, in fact, I felt that I was inside the mind of Alex receiving info dumps a little more than I would have liked. Still, when things do happen, Alex still finds himself put in danger just as often (if not more often) than his friends, so the author definitely didn’t make the second novel give the main character a break in any way.

Another thing that I loved about the second novel is that it builds from the knowledge that Alex and the readers learned the first time around. Whereas the characters in the first novel could only imagine the terrible things that could happen to inmates who were selected by the wheezers in the first novel, or infrequently see some of their handiwork come back as a monstrous entity, this novel will give Alex a much clearer understanding about the “other forms of existence” that the Warden is always mentioning and how they come about. At the same time, it makes the reader ask deep questions about the moral dilemma of human experimentation and how could the people running Furnace get away with such atrocities? In addition, questions like, should prisoners have the basic human rights of safety? And if we say no, then can we be certain that only guilty people will find themselves behind the prison walls?

While it wasn’t quite as exciting as the previous novel, I have to admit that I enjoyed Solitary a lot. Whether you are just considering this series for the first time or you previously enjoyed Lockdown, Alexander Gordon Smith’s Escape From Furnace series will imprison you in it’s underground passages and nightmarish landscape. Don’t expect to make it out of the first book or two without desperately wanting to check out the rest of the installments!

← What’s In My Mailbox?: The January 17, 2011 Edition
Interview With Alexander Gordon Smith, Author Of Lockdown and Solitary →