by Melissa Montovani on January 20, 2011 in Paranormal Teen Fiction • 19 Comments 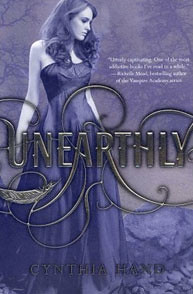 “In the beginning, there’s a boy standing in the trees.” Ever since Clara Gardner learned that she was an angel-blood, she’s been waiting to understand her “purpose.” She might be faster, smarter, and stronger than human beings, but that doesn’t mean that understanding the-who-what-where-and-when of her vision will be a walk in the park. Her visions depict a raging forest fire and an attractive stranger, and they draw her to a new school in a new state. There she meets Christian, the literal man of her dreams, but just when things seem to be getting easier, they get harder all over again. Just when she’s supposed to understand what she’s meant to do and who she’s meant to be, her attraction to another guy makes her question everything. When the sparks ignite into the fiery blaze of her destiny, will Clara be ready to face it?

I haven’t read many angel books, despite my frequent forays into the paranormal teen fiction genre. The few that I have read focused on the dark side of the angels on earth, and while they were enjoyable to me, they didn’t appeal to everyone who’s read them. By contrast, I’ve only heard good things about Cynthia Hand‘s debut YA novel. Sometimes the hype about a new book can be overwhelming, but I for one have to agree with the majority on this one. Unearthly is a moving portrait about one girl’s struggle to make sense of her feelings of love and her sense of duty, which I think will appeal both to teen girls and adults alike.

It’s not that Hand’s characterization of Clara is the only thing worth speaking about; I really enjoyed the plot and the novel’s pacing as well. In fact, there is only one way that I could accurately describe this novel — it’s unputdownable. Whereas a lot of paranormal novels depict a character coming to terms with who she is and all the angst associated with it, Hand made a great decision when she started the novel two years after Clara learns just how special she is. Don’t expect to get weighed down by that business because it just isn’t there. While Clara does have to learn a lot (about Christian, her purpose, how to fly, etc.) in a relatively short period of time, it never feels like merely a knowledge dump; it, like the main character herself, feels real.

So, you’re wondering how could a supernatural tale truly have the believability of a contemporary YA novel? First, despite her supernatural powers, Clara doesn’t want people to look at her life she’s a god of some sort. She may know why she was sent to earth, but that doesn’t mean that she wants to draw attention to herself or to rub it anyone’s face. Second, she has a slight rebellious streak, which many teens and adults who once were teens will understand as her developing sense of self. Finally, she’s not infalliable. Her purpose may have been revealed to her, but that doesn’t mean she blindly follows the rules, which means that sometimes, she’s far from perfect. She acts the way any normal teen would act, but it just so happens to be angel-blood.

Clara is just so refreshingly real that readers of all ages will not only get into her character, but also they’ll get into Unearthly.

Buy Unearthly today and save 21% off the regular price!