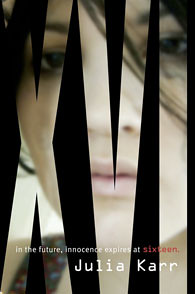 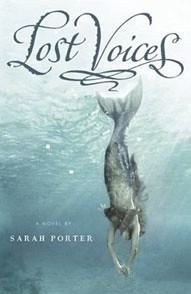 Over the last couple of weeks, I’ve been asking for your advice on what to read first from the list of new books that made it into my mailbox. I’m happy to report that a lot of you gave me your votes either on my blog, on Twitter, or on the YA Book Shelf Facebook group. Recently, most of you were voting that I read Unearthly over a few other titles, and I’m happy to report that my review of it should be posted a little later this week! So when I ask you which book I should read first this week, once again, I hope that you’ll place your vote! Will it be a dystopian novel, contemporary YA, or fantasy?

Last year, I read A LOT of dystopian YA novels, so I’m definitely excited about the first two titles that made it in my mailbox, namely Across the Universe by Beth Revis and XVI by Julia Karr. The former has been touted as a mix between the movie Titanic and Aldous Huxley’s Brave New World, and while I’m not a huge fan of the former, I definitely am one of the later. This appears to be very much on the sci-fi end of the dystopian novel spectrum with a large ship meant to be traveling 300 years in the future, but the main character quickly realizes that her being woken up 50 years early was a plan to kill her. Now she has to find out both who was planning her death and all of the ship’s secrets before it’s too late. Personally, I’m a little more excited about the concepts which Julia Karr brings up in XVI. Nina Oberon’s life is great, but then again, she’s 15. When she turns 16 and receives the Governing Council-ordered tattoo that goes along with it, her body will announce to all the world that she’s ready for sex – even predatory men. This fate has always been her worst fear, but when her mother is brutally attacked, her few simple, dying words change everything Nina thought she knew about her life. Now Nina must find out who she is and stay at least one step ahead of her mom’s killer. Are you up for some dystopian novels, too?

Not sure about dystopia? Maybe some contemporary YA like Amy Holder‘s The Lipstick Laws or some 20th century historical fiction, like Teresa Toten‘s Beyond Blonde will be more suited to your tastes. In the former novel, April Bowers is so unpopular that a single lunch at queen bee Britney Taylor’s table seems to change everything. Whereas before she was practically invisible, now, she’s basking in the healthy glow of popularity. However, a friendship with Britney comes with a high price tag. How much is too much for April? On the other hand, Toten’s novel takes place in the 1970s in a time when everything seems to be falling apart for Sophie Kandinskey. Just as her dad leaves to get sobered up, her mom retracts within herself, her first love marries someone else, and basketball is no longer the comfort it once was. It’s a good thing that she still has the Blondes and her Aunties in her corner. Whereas both of these novels seem to put the main characters in difficult situations, BeyondBlonde seems a little more like a feel-good novel.

Finally, I’m also really looking forward to check out Sarah Porter‘s summer fantasy release, Lost Voices. Why? Well, I’m really attracted to the contemporary / problem part of this novel as well as the fantasy aspects. On one hand, 14-year-old Luce is one of the ignored, mistreated, and hidden away girls..one of the lost girls. When her alcoholic uncle crosses the line, she reaches the depths of despair. She thinks that she’s going to die on the cliffs near her home, when a surprising thing happens instead – she transforms into a mermaid. Realistic and magical? Yep…sounds like something I’m excited to check out.

So which of these books should I read? Let me know what you think by casting your vote!

← Interview With Lorraine Zago Rosenthal, Author Of Other Words For Love
Solitary →