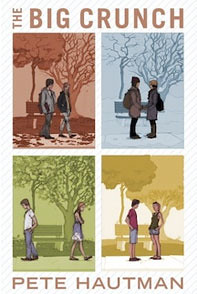 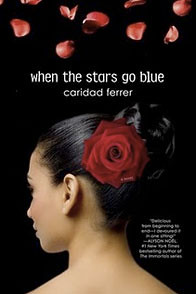 Every once in awhile, I get some books in my mailbox that I wasn’t expecting from some of my favorite publishers. Sometimes I think that one of the books might not do it for me, but more often than not I’m pleasantly surprised and enthusiastic about the new novels that I’m privileged enough to read in advance of the actual publication dates. This week is definitely one of the latter, which means that I’m not quite sure which one of these fabulous books I should reach for first. Maybe a little help from my readers is in order?!? Please let me know which of the following four books I should pick up once I’ve finished my current read.

I’m definitely not a dancer, but there is something about dance movies that have always been a guilty pleasure for me. Last week I watched Black Swan with my boyfriend and family when the latter were visiting for the holidays. While my bf couldn’t stand the movie, it definitely got me excited about reading Caridad Ferrer‘s latest YA novel called, When The Stars Go Blue. Unlike Black Swan, this novel is not a psychological thriller, but seems to be more in the realistic romance genre. The main character, Soledad, plans on spending the last summer at home teaching at a dance studio, so she can save money and eventually begin auditions for dance companies. However, when fellow student and love interest, Jonathan Crandall suggests that she instead perform in an intense and competitive drum and bugle corps as the lead character of Carmen, the opportunity to perform this role and spend time with Jonathan is too good to pass up. When another love interest enters the picture, Soledad finds her burgeoning relationship and her career as a professional dancer in jeopardy. Sure, the love triangle theme might have been done before, but I for one am really intrigued about the story and the Cuban-American population that’s sure to pop up in the novel’s Miami setting.

Whereas Ferrer’s novel came out in December, the next two books that I received are the early January releases by veteran YA author Pete Hautman and debut novelist Cynthia Hand. I’ve heard a lot of buzz surrounding the first novel in a paranormal trilogy about angels by Hand called Unearthly, including a positive review by Kristie from Text and Java, which emphasized the lack of teen angst. I don’t know about you, but personally, that’s music to my ears. While I’ve heard a lot less about Hautman’s The Big Crunch, I was really excited when I saw that Scholastic had sent an ARC of this novel my way. Hautman is, as you may or may not know, a National Book Award winner, and his anti-love story type novel for teens seems to be everything I really want in a romantic story. Who needs the cliches of so many love stories, like a “meet cute” or love at first sight, when the sexual tension between two teens who aren’t really sure what they are for one another makes so much more sense. Not only has the story caught my attention, but I also love the illustrations that grace the front cover and have a feeling that this book will appeal to both guys and girls, which is the whole package for me.

Finally, Michael Northrop‘s Trapped appeals to me for a couple of reasons. Most importantly, it’s a realistic thriller about a bunch of kids who get snowed into their school when no one picks them up during a huge blizzard, which reminds me of many a winter day in Southern Ontario where I grew up and Southern Quebec where I currently live. While I’ve never lived through a snow storm like the detailed in this novel, I have heard some crazy stories, like the Blizzard of ’77, which make it a little close to home and therefore, that much creepier. I’m also pretty stoked that I’ll have another book to read for the Contemps reading challenge, which I’d really love to be able to finish.

So which one of these novels would you like me to read next? Maybe you’ve already read it and are sure that I’ll love it too or maybe you just want to see what I’d say about it before you rush out to purchase a copy yourself. Either way, I think it might be a fun change of pace to get someone else to decide what I ought to read this time, so I can’t wait for your suggestions.

← Out With A Bang Readathon Giveaway Winner!
Win The Jumbee With The Reading Resolutions Giveaway Hop →