The Elite by Kiera Cass

by Melissa Montovani on May 2, 2013 in Dystopian YA Fiction • 5 Comments 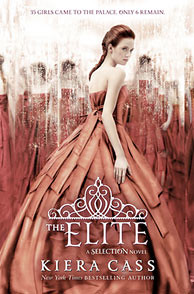 In The Selection, thirty-five girls entered the palace in Illéa to compete for the chance to win Prince Maxon’s heart, but in The Elite, the competition has been whittled down to the top six candidates. And if you are at all familiar with this series, then you know that only one of them will move on to become the wife of Prince Maxon and future queen of Illéa. Much like in the first novel, America is still teetering between the exciting new romance she has with Maxon and the memories that she had with Aspen, and since the number of girls has decreased to the Elite few, the others are competing ever harder to win Maxon’s favor, making it all the more urgent for America to decide once and for all.

If you’ve read my review of The Selection, then you know that I was a little hesitant to even read, let alone love the first novel. However, America and Prince Maxon quickly won me over with their swoon-worthy romance. With this aspect and America’s uncertainty about the selection process, I found my own thoughts aligning with her’s and her situation, cementing my interest in reading the second installment in the series and now, after having finished The Elite, I’m so glad it did. Just as she did in the first novel, Kiera Cass weaves a balanced story with plenty of unexpected twists and turns that are sure to keep readers turning the pages long into the night or whenever they have a spare moment during the day. Fans of the first book won’t want to miss this one.

With the cast of characters whittled down to a more manageable number of girls, Cass is able to develop each of their characters more fully than was possible the first time around. That’s not to say that they’re all similarly well rounded. Celeste’s reputation as a manipulative character becomes ingrained in both America’s and the reader’s mind, and may even sink to something worse. Kriss and America’s relationship develops in new and unexpected ways as the latter comes to realize that there might be more to Kriss than she first imagined, and of course, Marlee becomes more fully realized and relatable. That said, the characters of Elise and Natalie are much less developed than that of the other girls. Finally, America, Maxon, Aspen, the Queen and King all change in important ways, allowing the story to become more complicated than one might imagine at first. Readers will truly come to a better understanding of not only the precarious places each of the girls have at the palace, but also how much more complicated and realistic Illéa is than they (and America) might have first believed.

Not only are the characters more complicated this time around, but also the entire society of Illéa, in general, and the selection, in particular, becomes darker. If the first book wasn’t quite the dystopian novel that you were expecting, then you might want to remind yourself that this one probably won’t be either. However, as the world America lives in becomes more complicated, readers should watch for how it becomes increasingly darker, but not to the point where dystopia is the only relevant genre. However, this doesn’t mean that everything is now without reproach. For one, America hasn’t been forced to learn from her mistakes from the first installment, yet, which increases the tension between her and nearly every other character at the palace. Second, I was still unclear about the caste system and had to look it up on Cass’ website to clear some things up for myself. Similarly, I was fuzzy on both the spatial geography of Illéa, New Asia, and the various provinces and an understanding of the wars that Illéa is facing, though perhaps some of these questions will be answered in the final novel, The One.

The Elite isn’t the best book ever written. That said, it is the ultimate, fast-paced, guilty pleasure read that fans of the first book and even those who were on the fence about The Selection will enjoy.

Buy The Elite today and save 16% off the regular price!

← The Selection by Kiera Cass
Hidden Among Us by Katy Moran →

5 comments for “The Elite by Kiera Cass”