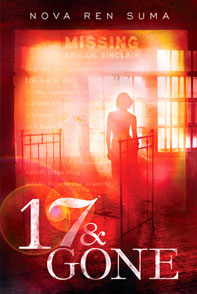 Seventeen-year-old Lauren has visions of girls who have gone missing. Few common threads link them together other than that they were all seventeen – like Lauren – when they disappeared without a trace. In Nova Ren Suma’s 17 & Gone, Lauren tries to escape these haunting visions to no avail, leading to tough questions: Why did the girls choose to speak to Lauren? Can she help them, and if so, how? And, most importantly, is she cursed to follow in their place? While Lauren desperately searches for the answers to these questions, things begin to unravel in her life, and when an accident lands her in the hospital, the truth will change everything.

Ever since I read the description of 17 & Gone, I knew I had to read it. There is something about the dark, Gothic worlds that Suma creates that have always appealed to my reading sensibilities, but this novel about a girl, who is haunted by missing seventeen-year-old girls, struck a chord with me and my tween and teen years. (I grew up one town away from where Kristen French was abducted, and I still remember the fear that surrounded our community at the time.) Now, having read it, I can honestly say that this novel is a dark, twisty tale that readers won’t be able to turn away from and that Suma is a writer with the unique understanding of the Gothic tradition, literary fiction, and the fear and guilt a young girl feels when someone (or many girls) she knows disappear without a trace.

If I had to choose one word to define this novel, then it would be a toss up between “beautiful” and “layered.” Beautiful because Suma has a way with language that gives this prose novel a poetic feeling. At strategic points throughout the novel, she uses repetition of a single word or parallel sentence structure to draw connections between the content and people mentioned in a specific paragraph. Similarly, there were moments when Suma’s use of alliteration hooks the reader, making them care, even when they’ve just been introduced to the main and secondary characters or the concept of missing girls in general. Because even though this book is about how lost Lauren feels and the specific girls who begin to show themselves and their stories to her, I keep feeling as though this particular situation is, in part, meant to help readers connect with the missing girls and suspected runaways that they hear about or know in real life. To make us consider the same questions that plague Lauren, especially “Why this particular girl?” and “Am I or someone I know vulnerable to becoming lost or missing, too?,”  and at the same time, to give us hope that someone will find them before it’s too late.

Perhaps the parallels that this novel presents and makes you ponder are part of the layered effect, but it goes much further than that alone. In 17 & Gone, Walt Whitman’s concept of the “multitudes” he and everyone else contains is in full form through both the structure of the novel as a whole and the characters Suma creates. From the missing posters written at strategic points in the novel to the foreshadowing that Suma builds into the text, there would be a lot going on, even if we just looked at the form of 17 & Gone, but of course, there is more. One of the things I was most amazed by is how well developed Lauren and the many secondary characters of missing girls there are. Readers are not only deeply immersed in the world as Lauren sees it, but also each of the missing girls have very specific back stories and mannerisms, likes and dislikes, giving them characters that are just as identifiable to the reader as a fingerprint would be to the police detective looking for them. And of course, the details aren’t written just as a means of making them unique and important to Lauren, but also they become important plot points later on in the novel. Even the hardcover image plays with the idea of layering by not only presenting the title, author name, and expected image, but also a subtle rendering of the missing poster of Abby Sinclair, the girl who started Lauren’s obsession with missing seventeen-year-old girls. While Suma probably had no say on the cover – as is typical in the book publishing industry – Dutton couldn’t have designed a better and more fitting one for this book.

If 17 & Gone has intrigued you since it was released or if my review has peaked your interest, then please pick up a copy of this beautifully written and fantastically plotted novel. You won’t regret your journey into this poignant and suspenseful world for a second.

← Interview with Jennifer A. Nielsen, Author of The False Prince and The Runaway King
The Raven Boys by Maggie Stiefvater →