And The Mountains Echoed by Khaled Hosseini

by Melissa Montovani on June 11, 2013 in Realistic Teen Fiction • 0 Comments 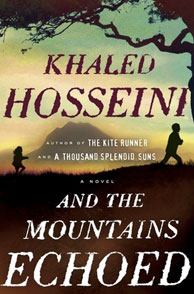 Khaled Hosseini is one of the most widely read and beloved, living novelists in the world. While he doesn’t write YA literature, he does write beautiful, expansive stories that are sure to appeal to teens as much as they do to adults. With And The Mountains Echoed, readers of all ages can expect to find his most impressive book – in both scope and setting – of anything he’s ever attempted until now. In this novel, Hosseini tells a multi-generational story featuring brothers, sisters, fathers, stepparents, caregivers, daughters, sons, and cousins that you’ll never forget.

Ever since reading The Kite Runner, I’ve been a fan of Hosseini’s writing, and when I had the chance to read A Thousand Splendid Suns, it only solidified my love of his stories. So, of course, when I heard that he was coming out with a new novel this spring, I knew that I had to read it, and I’m so glad I did.

While I certainly love both of the author’s earlier novels, I think this one is even better. I’ve read other long, interconnected stories, which often weave the alternating POVs back and forth. Sometimes they leave the reader with a new perspective that goes on for far too long without demonstrating how this new piece of the larger puzzle connects with the previous ones. Not so here. Yes, there are a lot of narrators in this novel – nine in total – and two of them even share the same name, but unlike less successful novels of this type, Hosseini usually gives us a glimpse of the character before it’s their turn to tell their story. In the one case where that doesn’t happen, Hosseini gives us a familiar setting and connects us with other familiar characters, so the reader always feels grounded and invested in the narratives that the main characters shares with them. With these aspects of Hosseini’s writing, he proves himself to be a gifted storyteller, one who is unlikely to find a reader that isn’t eager to learn more about the characters and the situations presented over the course of the novel’s 402 pages.

One of the things that I loved most about And The Mountains Echoed is that the characters are flawed in beautiful and destructive ways. For those who haven’t read it yet, this may seem like an unusual thing to admire, but somehow, after having read each of their stories, I felt as though they were beyond judgement. I’m not positive, but I think that Hosseini would see them all that way, too. Perhaps the epigraph he choose, which was written by the 13th century poet, Jelaluddin Rumi, says it best:

of wrongdoing and rightdoing,

there is a field

I’ll meet you there.

Each of the characters that Hosseini shares with us strives to do something good for others, but sometimes their desires can’t live up to their actions. Perhaps they feel inadequate to fulfil what they set out to do, or maybe they realize only later, how destructive what they’ve done ends up being. Above all else, Hosseini imbues his characters with a realness that readers will recognize in themselves if they only look hard enough. And if we do see ourselves in the jealousies, desires, and plans that we can’t quite fulfil, then maybe, like Hosseini, we’ll be able to only share in each of these connected beautiful and dark tales, and not condemn them.

I don’t want to say much more. Anything specific about the characters and the situations that they find themselves in would give too much away, and I want you to be able to experience this novel the same way I did the first time, with an open heart, an open mind and completely spoiler free. (Yes, I said the first time because I’m sure that this will be a book you want to read over and over.) Just know that you might gasp at times, find your heart breaking, tears falling from your eyes, or smiling in absolute awe of this gifted storyteller and the dazzling story that is And The Mountains Echoed.

Buy And The Mountains Echoed today and save 25% off the regular price!