by Melissa Montovani on June 17, 2013 in Dystopian YA Fiction • 0 Comments 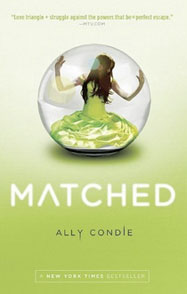 In the Society, Officials decide everything that makes life worth living. Who you’ll fall in love with, where you’ll work, and when you die. Cassia has never questioned their decisions and believes, like everyone she knows, that accepting a few concessions here and there is hardly a price to pay for living a long life with the perfect job and the ideal mate by her side. So, in Matched, when she sees her best friend on the Matching screen, she’s certain that he’s the One for her…until another face flashes on the screen for a brief moment before it fades to black. Now she’s faced with difficult, if not impossible decisions: between Xander and Ky, between the only life she’s ever known and one that no one else has ever followed – between the perfect life and the one about which she’d be passionate. In the first book in Ally Condie’s Matched Trilogy, readers are in for a classic Dystopian story that’ll resonate with the here and now.

When I first read Matched back in 2010, I enjoyed the characters and storyline that was romantic in a quiet sort of way. Now, as I read it again to prepare myself for the remaining two books in the trilogy, I found that I enjoyed it all over again. Cassia is a charming and strong character who has always followed the rules and who has waited her entire life to her match banquet. She chooses the green dress, one of the more unusual colors among those seventeen-year-old girls on their way to their match banquets. However, when Cassia attempts to view Xander’s information on the microcard, even though she assumes she knows everything about him, and the image changes from his to Ky’s, it sets off a chain reaction, causing Cassia to question things that she’s always assumed to be true. It makes her wonder more about Ky, even though she cares for Xander very much. It makes her wonder whether everything the Society has told her might be wrong.

While Cassia and the storyline that develops between her and both Xander and Ky is clearly the main reason that readers will enjoy this novel and look forward to reading the next two books in the Matched Trilogy, there is more to love about this novel. One of my favorite parts was the way Condie incorporates illegal poetry that is familiar to readers of our literary canon, especially Dylan Thomas’ “Do Not Go Gentle into that Good Night.” It’s a poem about never giving up, about always resisting, and it’s a perfect fit for the narrative that Condie wanted to tell. Moreover, a poem about resisting the status quo is also a perfect way to engage the interest of adolescent readers, who find themselves at a time in their lives where they have to learn to stand on their own, to make their own decisions, even when they might clash with the perspective of their parents.

Although there are many Dystopian YA series out there or books that are represented as being of that genre, they don’t all live up to the classic features of the genre. Some of them are more about romance than anything politically motivated. Some of them have political aspects, but the main character is always aware of the negative aspects of the society in which she lives and never really has to come to terms with a new, resistant reality. Condie, however, clearly has a grasp of what the classic Dystopian genre is about and with Matched, she’s transformed it into a book that is sure to appeal to teens and maybe get them anxious to read books that are classics in the genre, like Aldous Huxley’s Brave New World and George Orwell’s 1984. And of course, after reading Matched, Dystopian YA readers of all ages won’t be able to stop themselves from consuming the entire series in one go. I know that’s what I did.

Buy Matched today and save 10% off the regular price!