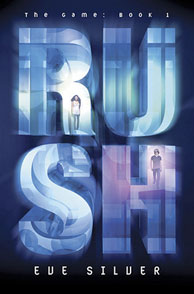 When Miki Jones is pulled out of the life she’s always known, pulled through space and time into some kind of game, the life that she’s carefully controlled spins into complete chaos. While in the game, she and a team of teens are sent on missions to seek and terminate the Drau, alien creatures that are at once terrifying and mesmerizing. In Eve Silver’s debut YA novel, Rush, there are no practice runs, no training, and no way of getting out. Miki only has her kendo training and the guidance of their secretive and attractive team leader, Jackson Tate, who tells her that the game isn’t really a game, that what Miki and her teammates do determines their very survival. Oh and the survival of the entire human population. Miki laughs. He doesn’t. And then the first book in the thrilling Game Trilogy takes a scary and deadly turn.

Rush is the perfect name for the debut teen book from this Toronto-area author because it starts with a rush and doesn’t let up. Maybe it’s because Silver has authored more than a dozen books for adults. Maybe it’s because she understands what teen readers and adult readers of teen novels want. But either way, her writing builds mystery, intrigue, and an understanding of the sci-fi world she’s created into every action-packed moment without making the reader ever feel like they’ve entered the avalanche of all info dumps. At the same time, the real world that Miki lives in with her friends and family is believable and fully developed, which is – of course – necessary to ground the reader in something familiar when the game and all that it entails is far from it.

Speaking of Miki and her real life, I really appreciated how the author draws a connection between Miki’s existent trauma and ongoing depression with the trauma-inducing “game world” where she and her teammates, Richelle, Tyrone, Luka, and Jackson, are fighting for their lives and those of everyone else they know. iki tells us that the way she’s come to grips with the difficult stuff that’s happened in her life over the last year is through deep breathing and controlling her every waking moment of her life to the point where she only feels to emotions: anger and pain. Readers will soon find that Miki’s game-life self is different and that maybe some of the trauma she experiences in this alternate reality will come to affect both her waking and dreaming life in both small and large ways. Just as I mentioned above, there is constant balancing effect going on through Silver’s writing, and I for one really appreciated her ability to make it look easy.

While this book may be one of many 2013 releases with some sort of alien invasion, it’s an original story with a lot of swoonworthy moments between Miki and Jackson who infuriates and gets her heart racing in equal measure. And even though I as able to understand the meaning of one moment – an important and poignant nightmare that Miki has – much before she comprehends what it meant, the explanation goes in a direction that I never saw coming and the book could never be called predictable.

Pick up Rush, read it in a day or two like I did – I know you want to – and then, wait patiently for 2014 and the next book in the Game Trilogy, Push, to be released. On second thought, you’ll probably be dying for 2014 to get here sooner, so you can find out what where Silver is taking Miki and the rest of this cast of characters, but don’t let that stop you from reading Rush now.

Buy Rush today and save 21% off the regular price!

← And The Mountains Echoed by Khaled Hosseini
Matched by Ally Condie →

3 comments for “Rush by Eve Silver”