by Melissa Montovani on June 25, 2013 in Paranormal Teen Fiction • 0 Comments 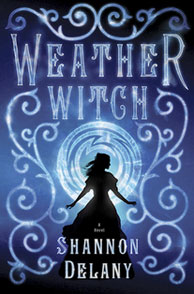 Some people fled the Old World to avoid war and others fled to leave behind magick. However, even in the fiercely regulated New World, where the power that wells up in people and calls down storms is illegal, it seems that the officials can’t stop these people – weather witches – so they’ve decided to use them instead. In Weather Witch, Shannon Delany – author of the 13 to Life series – has brought to life an alternate 19th Century Philadelphia that readers won’t be able to tear their eyes from very easily. Jordan Astraea, a high-ranking member of The Nine is from a flawless background without any taint of magick or witchery. However, on the night of her seventeenth birthday, the Wraiths and the Tester appear and call her responsible for summoning an unforeseen storm. Taken from her family and the boy who is courting her, Rowan, Jordan is sentenced to be Made – to become a Conductor – and be enslaved as an airship’s living battery. Will breaking Jordan be easy or prove the very thing that her carefully constructed society cannot survive? Will the chance of losing Jordan forever make Rowan the hero he would have never dared be or break his spirit and any chance he had within society entirely?

The 13 to Life series was entertaining and darker than I’d imagined it being initially…in a good way…so when St. Martin’s Press asked me if I’d be interested in reading and reviewing the first novel in Delany’s new series, Weather Witch, I was intrigued even though I knew little of what it would end up being. I expected another contemporary paranormal story, but this book is far from what I imagined. Instead of what I expected, the author created a historical, Philadelphia setting in an alternate universe, where the world is lit by storm cells run on the energy of witches who can control the weather rather than steam, where slavery of a different sort than they type that really existed in our US is alive and well. Over the course of the novel, Delany explores the themes of slavery, torture, and examines what forces are necessary to ensure that these systems are held in place to keep society running according to the status quo. At the same, she examines what might keep someone fighting to prove their innocence or to maintain their freedom and that of others, demonstrating that this novel is far more complicated and cerebral than one might initially assume a paranormal romance might be.

With themes as serious as this novel has, Delany needed strong characters, and she certainly delivered with characters like, Jordan, Rowan, the Maker – Bran – and Marion Kruse, another weather witch. Jordan starts from a place of self-consciousness among the elite of her society; she thinks that her beau, Rowan, might just be pursuing her to increase his rank in their society. Bran begins the story with no qualms about breaking Marion into the powerful weather witch he is. However, in all four of these cases, Delany develops their character arcs in ways that even they wouldn’t have expected at the outset. Beyond the main characters, there are several secondary ones that readers are sure to love as well.

Characters and themes are obviously important, but if you’re wondering about the writing, then you should rest assured that there’s nothing to worry about there either. I liked the 13 to Life series, but through this novel, I learned that Delany’s writing abilities are more diverse. Not that there was anything wrong with them before, but with this novel, she demonstrates her felicity with not only her novel’s 19th century setting, but also with a writing style more akin to that period. She sets her scenes with lush descriptions like her 19th century counterparts, uses alliteration and other poetic turns of phrases well, and most importantly, she offers light, ironic humor at the expensive of both a, supposedly, popular author of penny dreadfuls and a famous American one by the name of Edgar Allan Poe. Taken together, Delany proves that her popular series about werewolves won’t be the only thing that she’s known for within the YA reading community, and possibly beyond it.

Buy Weather Witch today and save 15% off the regular price!