The 5th Wave by Rick Yancey

by Melissa Montovani on July 9, 2013 in Sci-Fi & Fantasy Books For Young Adults • 5 Comments 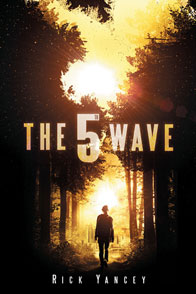 With the 1st wave, the world was shrouded in darkness. During the 2nd, the lucky escape a horrible death, and with the 3rd, the unlucky survive in a desolate world filled only with their dark memories of loss. After the 4th wave, the survivors learn one thing: trust no one. In Rick Yancey’s critically acclaimed The 5th Wave, Cassie runs from Them on a lonely stretch of highway during the dawn of the titular wave of an alien invasion. She runs from beings who look human, but who have made it their mission to kill anyone they see. Cassie believes that staying alone is the only way to ensure her own life until she meets Evan Walker. Charming and mystifying, Evan may be the key to tracking down her brother, Sam – and ultimately, keeping herself alive. But trusting, defying, and getting up one more day might be the hardest things that Cassie has ever done when the world has gone so horribly wrong.

Within the first few pages of The 5th Wave, I fell in love with Cassie’s voice. When she wrote in her journal, “In case you’re an alien and you’re reading this: BITE ME[,]” I thought, “Yes!” along with things like, who is this girl and how did Yancey create a female character who could hook me into the story so quickly with a simple turn of phrase? So even though the first section, which moves back and forth between Cassie’s lonely present experience on a deserted highway and her experience during the previous waves of the alien invasion, was a little slow, I pushed through, and I’m so glad that I did. This novel is more than just a good science fiction story for young adults, and it’s certainly more than just an action-packed page-turner featuring aliens. Rather, it’s a prime example of how YA fiction of any sub-genre can incorporate great storytelling with writing that’s on par with the best literary fiction. Yancey understands the ways in which 20th century culture imagined alien invasions, flipped these theories on their head, and reached out to incorporate additional pop culture elements, such as books, movies, and comic books, and tropes of poetic writing to give readers a meta fictional, post modern experience of an alien apocalypse. And best of all, you won’t be able to put it down.

Written from the perspective of four individuals, this novel focuses primarily on the dark experiences of Cassie and Private Zombie, a teen who somehow makes it inside Wright-Patterson Air Force Base, which just so happens to be Cassie’s dad thought they ought to go. Yes, this is only one of the many places, people, and imagery that Yancey employs pop up in the narration of other characters. And they aren’t coincidences because the characters are living through the same apocalypse; Yancey clearly orchestrated these repeated aspects of his narrative either through very careful planning in the outline stage or during the revision process. Moreover, these repetitions demonstrate the interconnections between the characters, show that they aren’t alone in their suffering, and speak to the insidious nature of the alien species that he creates, which is in direct contrast to what Cassie calls “the aliens inside our own heads,” the ones that would lead human beings to set aside their differences to defeat them. For starters, after the fourth wave, it would be a miracle if any human beings were able to trust one another again.

Beyond the characters, voice, and allusions to literature and pop culture, I personally loved how the author creates his dark vision of an alien invading species. It’s clear from the prologue, entitled, “Intrusion: 1995” that the alien plot started way earlier than either Cassie or Private Zombie could’ve imagined. Moreover, while I haven’t spoken to the author or read anything about why he wrote the book the way he did, the events he depicts in the novel clearly draw on historical depictions of human wars and the excuses for why they were started in the first place. He makes readers ask important questions about the nature of war, the justifications for it, and who and how human beings should be responsible for fighting these wars against Others, whether they’re of human or alien origin. The way that Yancey deals with these moral and ethical questions are a big part of the reason that I believe both teen and adult readers of YA will gravitate toward this story in droves.

The 5th Wave is here. The only question is, when will you be reading it?

Buy The 5th Wave today and save 16% off the regular price!

← The “Rules”: Katie Williams Discusses Her Use Of Ghost Story Conventions in Absent
When We Were Good by Suzanne Sutherland →

5 comments for “The 5th Wave by Rick Yancey”