When We Were Good by Suzanne Sutherland 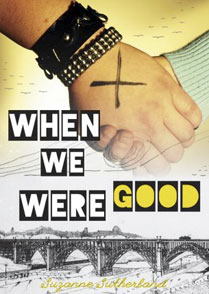 It’s the beginning of the year 2000, but while the world didn’t end as predicted and the computers figured out how to move from December 31st to January 1st, things aren’t going so well in Katherine’s personal life. Her “best” friend ditched her for another boyfriend, and her beloved grandmother died suddenly on New Year’s Eve, making Katherine feel like she’ll never be able to fill the void of goodness in her life again. While deep in the mire of grief and self-doubt, she finds new love in unexpected places: in Toronto’s underground music scene and maybe for a straight-edge, loud mouth misfit named Marie. In When We Were Good by Suzanne Sutherland, Katherine seeks comfort in loud guitar rifts, poets who can seemingly read her mind, and real conversations as she struggles to understand not only what she and Marie might mean to each other, but also what it truly means to be good.

In When We Were Good, readers can expect a believable and sensitive portrait of Katherine, a high school senior who is struggling with depression and suicidal thoughts, with feelings of self-hatred and the confusing attraction toward someone of the same gender. This debut novel is edgy with realness that teen readers who are struggling with their sexuality, with depression, or with a low sense of self worth will appreciate. This isn’t a book that glosses over the hard, dark bits in the main character’s life or that ties everything up in a pretty bow at the end, but it does offer hope and a suggestion that things might get better for Katherine. Moreover, unlike some reviews that I read on Goodreads, I don’t think that Katherine’s love interest comes on far too strong to her or pushes Katherine into something that makes her uncomfortable. Marie’s relationship with Katherine – whether as a friend or more – is in direct contrast to how Ivan treated her when she felt uncomfortable with the direction of his advances.

Beyond this realistic portrait, Sutherland turns the city of Toronto, a $50 bill with William Lyon MacKenzie King’s face, and the underground punk /alternative music scene into characters in their own right. Many YA books that are set in Toronto, in particular, or Canada, in general, give only one or two brief references to the setting, especially when they’re published with an American company. So perhaps it’s because this novel was released by a small, Canadian publishing house that allowed the author and editor to see eye-to-eye on the importance of explicitly referring to some of Toronto’s iconic structures, like the Bloor Viaduct and the Luminous Veil, literature, like Michael Ondaatje’s In The Skin of the Lion, subway and geography, and the music scene that helped Katherine feel less alone. I’ve been living in Toronto for less than a year and am still in the dark about a lot of city’s history and geography, but reading When We Were Good not only illuminated it to some degree for me, but also made me want to learn more – whether through a simple internet search, a quick look on Google maps, or a physical journey in real life – about the city I now call home.

In addition, Katherine’s love of literature is an avenue worth exploring further. While there are several books mentioned in passing that the main character reads, Tracy-Anne Sugar’s Runaway Feeling makes her feel safe and not so alone in the world or freakish, as if the author had read Katherine’s mind. Maybe When We Were Good will do that for some of its readers, too. In addition, In the Skin of a Lion points to some of the novels thematic points, including the various histories that have been written on Toronto, but are now only faintly visible – like real life palimpsests – and the potential extremes of undiagnosed and untreated depression. For example, immigrants put themselves in harms way to construct the Bloor Viaduct, but this truth was forgotten before Ondaatje’s novel came out. Similarly, Sutherland’s story is set in another significant time in the Bloor Viaduct’s history, precisely two years after a suicide barrier, called “The Luminous Veil” was approved by the city. Katherine, however, realizes that if someone wants to die there, the barrier will increase their negative self-talk when they realize they’ve failed to do what they came there for, and thus, could increase the person’s resolve to die. Katherine’s story – like that of Ondaatje’s immigrant and working class characters – gives a voice to those suffering from mental illness and suicide ideation, ensuring that their history and the political significance of the barrier in both 2000 and present won’t be forgotten.

From its depiction of a positive, burgeoning LGBT relationship and the representation of teen depression to its larger historical and literary significance, When We Were Good is a great read that LGBT teens, adult readers of YA, and those interested in reading about mental illness or the city of Toronto shouldn’t miss.

Buy When We Were Good today and get 21% off the regular price!