The Impossible Knife of Memory by Laurie Halse Anderson

by Melissa Montovani on February 13, 2014 in Realistic Teen Fiction • 1 Comment 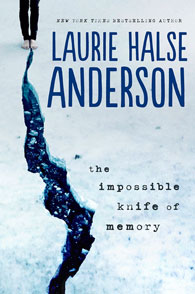 For five years, Hayley Kincaid and her father, Andy, have been travelling across the country, never settling down in any one place for long, as he tries to outrun the demons that have tortured him since returning to the US after several tours in Iraq. However, now that Hayley is a high school senior, they’ve returned to the town where he grew up, so she can attend school like most kids her age. Perhaps Hayley can have a normal life for the first time; perhaps she can set aside the painful memories that threaten her own psyche as well; perhaps she can even have a real relationship with Finn, the hot guy who likes her, but who might also be hiding some secrets of his own. Or perhaps being back home won’t help Andy’s PTSD, but will instead find him being dragged to the edges of sanity and drug abuse. With The Impossible Knife of Memory, Laurie Halse Anderson shows, once again, that she not only has her finger on the pulse of an authentic teen voice, but also can bring readers along for an emotional roller coaster that they won’t soon forget.

Long time readers of YABookShelf.com probably know one thing about me already (and new readers will learn it now) – I’m a huge fan of Anderson’s young adult novels. It’s fair to say that I become a crying or sobbing mess at least once in each of her novels, and my recent experience reading The Impossible Knife of Memory was no exception to this rule. That said, while reading this one, I had an unexpected, visceral reaction to it: fear. Within the first 50 pages, I felt real tension within my body and the sinking fear that Andy’s PTSD was only going to be the tip of this emotionally difficult iceberg. And I was right. The more I read, the more I understood why Hayley fought so hard to stay in the present moment, to not only have little thought to what her own future would or could entail, but also to keep the ghosts that haunt her own past – even the good memories – at bay. And, of course, the more I read, the more I understood – once again – just how much of a literary genius Laurie Halse Anderson is.

Beyond the emotional roller coaster that Anderson took me on, there is a lot to savour in The Impossible Knife of Memory. Hayley’s voice, for one, speaks to a very real, recognizable character: someone with a tough, put-the-boxing-gloves-on-first-and-ask-questions-later exterior that covers up a fragile interior. She is sarcastic and angry in a way that is sure to draw in teen readers from the very first page when she says both: “Detention was invented by the same idiots who dreamed up the time-out corner” and “Belmont High – Preparing Our Children for the Nifty World of 1915!” In addition, there are moments, particularly in the dialog between Hayley and Finn, which are very funny and witty, and thus, help balance out some of the heaviness of the novel’s subject matter. Finally, while some of the writing techniques that Anderson employs, such as allusions to classic and modern classic literature, lists, and chapters written in an alternate perspective – Andy’s in this case, will be familiar to her fans, the combination of Hayley’s voice, interesting subplots, including a complicated romance and this unique story about PTSD and secondary PTSD mean that her readers will have never seen her like this before.

The Impossible Knife of Memory is a haunting novel that will resonate with teens with enlisted parents, adult readers of young adult fiction who had parents that fought in other wars throughout the years, and readers who have experienced PTSD or secondary PTSD from some other cause. (Then again, even if you don’t fit into any of these categories, this book is sure to touch you.) Pick it up today, but be sure to have some tissues at the ready because, if you’re anything like me, it’ll have you crying before the novel is through.

Buy The Impossible Knife of Memory today and benefit from 21% off the regular price!