Where It Began by Ann Reisch Stampler

by Melissa Montovani on March 20, 2014 in Realistic Teen Fiction • 0 Comments 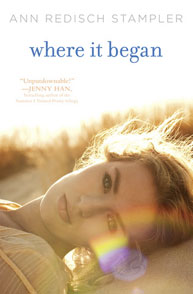 Sometimes the end is just the beginning. When Gabby Gardinar wakes up in a hospital bed, she seems to be the prime candidate for a Mothers Against Drunk Driving ad and without a single memory of the car accident that got her there. In fact, the only thing that she can recall, in every frank and derisive detail, is the year leading up to the crash. In Where It Began by Ann Redisch Stampler, Gabby describes her transformation from Invisible Girl to Trendy Girl Who Dates Billy Nash (aka Winston’s Most Desirable Boy Ever), then finds herself wondering: Why is Billy being distant all of a sudden? Do her classmates know something that Gabby doesn’t? Was anyone else in the car that night? As she peels back the layers of her life, Gabby begins to realize that her climb up the Winston social ladder has been as intoxicating as it has been morally complex…and that maybe her life isn’t quite the same as she imagined it to be.

While I ultimately found this novel impossible to put down, the first section of Where It Began was a little on the slow side to me. In part, it was Gabby’s semi-whiny voice that put me on edge and wonder why she was so concerned with where Billy – who seemed to be a jerk – was and why he was being so distant. It wasn’t so much what he’d done up-till-then that clued me in on his less-than-worthy nature, but rather the way that Gabby seemed so worried that she’d lose him if she didn’t keep her “clinginess” in check or how she described being concerned with ensuring that there sexual encounters were in the dark because she was worried that he’d find out she wasn’t perfect underneath her clothes. Through Gabby’s own insecurities, she inadvertently reveals a lot more about Billy than her constant worshiping of him ever could. For a lot of this section of the novel, it is difficult to get a real grasp on how fast or slowly time is passing because Gabby is regular on pain medication from her IV, and when she mentions at one point that she hadn’t seen Billy in 21 days, I thought, “Really, it’s only been that long? What’s the big deal?” Of course, if I’d been in Gabby’s situation, then I’d probably be nearly as concerned with not having seen my boyfriend in almost a month, especially given the circumstances, but as a reader, I found it hard to empathize with her initially.

As the novel progressed and began focusing more on the present, rather than the year leading up to the accident, I became more interested in seeing how the story played out. I was 95% sure that I knew one of the major reveals, but on the one hand, I wanted to see if I was correct, and on the other, it was interesting to see the way Gabby tries to pull something over on the “system” by denying that she has a drinking problem, crying uncontrollably, and saying that she doesn’t want to talk about it or see anyone. I also got a greater understanding of why Gabby seems obsessed with clothing, makeup, and the distinction between Beverly Hills vs. the Valley from learning more about her parents, who seem to be solely concerned with the appearance of things rather than the truth. Whether it’s their daughter’s happiness, her social status and how it will help them, or ways to get Gabby off with only probation and possibly losing her license, they clearly haven’t spent any time getting to know their child over the years. If they’d behaved differently or taught Gabby that her self-esteem shouldn’t be based solely on her appearance, then perhaps she never would’ve ended up on the side of the road, covered in bruises and holding the car keys. Of course, if they’d been like that, then we never would’ve had a novel to read or a mystery to unravel.

I’ve read some reviews that said it was impossible to identify with Gabby and her experience because she was so obsessed with her boyfriend, Billy. Some people find her focus on Billy particularly troublesome because he’s clearly not a great guy, and while I understand their argument, I don’t agree with them. The fact is that I know young women who have been in relationships somewhat like Gabby and Billy’s before. No, they weren’t in car accidents, nor did they have either real or imagined drinking problems, but they did sometimes change themselves in ways that would make themselves more agreeable to their boyfriends or lie to everyone – even themselves – about how healthy and desirable the relationship really is. These themes play out not only through the plot, but also through the allusions to fairy tales and children’s stories that Stampler deliberately chooses and turns on their heads, such as “Sleeping Beauty” and “Pinocchio.” When taken as a whole, Where It Began is a book that I thoroughly enjoyed and makes this author’s books on my list of go-to contemporary YA novelists.

Buy Where It Began today and benefit from 15% off the regular price!

← The Astonishing Adventures of Fanboy and Goth Girl by Barry Lyga
Rape Culture In The Divergent Movie: Here’s Why It Matters Part 1 →