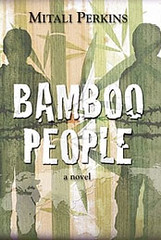 Most of the coming of age novels I’ve reviewed so far feature young women, but today, I have the pleasure of announcing that I’ve starting reading and will soon be reviewing Mitali Perkins new novel, Bamboo People. This novel tells the story of two 15-year-old boys. I’m really excited about the prospect of checking out this book because Publisher’s Weekly recently gave it a starred review. In this novel, the two main characters, Chiko and Tu Reh, are about as opposite as two boys can be. Chiko is a Burmese boy, who is anything but a freedom fighter; Tu Reh, on the other hand, is part of the Karenni minority and wants to join in on the fight for freedom after seeing his family’s home and bamboo fields get destroyed by the Burmese army.

With the upcoming release day on July 1, 2010, now is definitely a great time to read and review BambooPeople. If you haven’t already had the opportunity to read it, then you should run out and buy it in a couple of weeks or pre-order this novel right now! If you do, you may very well find it in your hands on or before the official book birthday.

Of course, there is another option that runs between today and Wednesday June 30th at 8pm EST if you live in either the US or Canada. What is it? Well, if you take the time to enter my Bamboo People contest, then you may just find yourself winning a brand new hardcover edition of this novel. As usual, you will also have the option of getting additional entries, but see the form for further details about what they entail.

One of the extra entries will be from answering this question in the comments below: What would you do if you were forced into the army and you couldn’t say goodbye to your family? Or what would you think/do if you son/daughter didn’t come home and you knew that the government must have taken them into prison, the army or worse? The winner will be announced on my blog on July 1, 2010. Best of luck to everyone who enters!