by Melissa Montovani on July 7, 2010 in Realistic Teen Fiction • 2 Comments 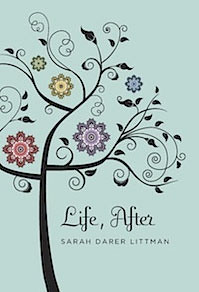 Many of us have been touched by an event that changes the course of our lives forever from that day forward. (I know that I have.) In Life, After, we learn that for Dani Bensimon, this day was July 18, 1994 when a terrorist act in Buenos Aires, Argentina kills her aunt and her aunt’s unborn child. Life hasn’t been the same for her family ever since, but it becomes nearly impossible once the financial crisis hit, causing her father to lose his business. Now her family life is filled with a lot of anger and worry, fighting and walking on egg shells. School is better, but her best friend Gaby and her boyfriend Roberto both end up leaving Argentina for Isreal and the the United States respectively, which adds additional stress to her life. It is, however, only after her own family moves to New York City in the hopes of making a better life for themselves that Dani realizes sometimes even positive changes aren’t always pleasant.

I first heard of this novel on Sarah Darer Littman‘s website, and I have to admit that I instantly fell in love with the cover design. In fact, the design coupled with the fact that I’d recently read and loved her first novel for teens, Purge was actually, which ensured that I HAD to read it. The subject matter is wildly different for her first and second YA novel, but I know it’s one that I wish was around when I was a teen. While both novels are emotional reads, Life,After has a heaviness half of the time that wasn’t in her previous novel due to Dani’s father’s depression and its consequences. However, don’t worry that it is depressing or that you won’t be able to get into it because many other aspects of trying to fit in her new American high school function to balance out the difficult parts very well.

One of things that I really appreciated was Littman’s exploration of how a parent’s depression would affect a teenager. Sure, Dani agrees to help take care of her younger sister and she even cooks the meals frequently because her mother works, but like any young adult, she doesn’t want to. She doesn’t think it’s fair that she has to do these things when she has two parents who should be working together. Of course, this isn’t the only side of the story. While Dani isn’t particularly sympathetic toward her father’s plight, I found that as an adult reader my understanding of the situation was a lot more complicated (it may be the case for teens as well, but it’s hard for me to say since I’m not one). While I did sympathize with Dani’s thoughts and don’t think that I could live in a situation like hers, I also understand how difficult and insidious depression is for the person suffering from it. The tension between these two characters makes you want to keep reading to see how it will turn out.

On Twitter, I mentioned that I thought this novel is really moving, and that was when I was still really close to the beginning of the novel. As the main themes of terrorism and societal integration build throughout the novel, the unexpected happens. Some love dies, some friendships are forged and hope and happiness seem to be forthcoming. If you’re like me – a sensitive soul – you might be reaching for the kleenex box on more than one occasion. You may also get to practice your Spanish language skills, which is always fun.

And you’ll also have the chance to laugh a lot as well.

If you can’t guess, I really liked Life, After. I probably would have given it more stars if there hadn’t been a small portion of dialog that would seem more appropriate coming from a professional explaining the issue to teens than between teens. Keep in mind though that the positives really outweigh this issue, so check it out.

2 comments for “Life, After”