by Melissa Montovani on August 17, 2010 in Teen Book Trailers • 9 Comments 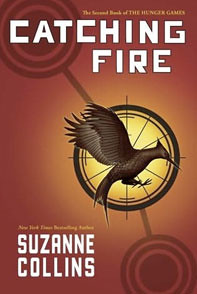 When I finished reading The Hunger Games, I was – understandably so – on fire with the desire to continue the series as quickly as possible. However, things got in the way; I had other books to read, interview questions to write, reviews to write, and emails to send. Then at some point, when the strong urge to continue on had cooled slightly, I decided that it would be in my best interest to read Catching Fire at a time closer to the official release of the final novel in the series, Mockingjay.

I’ve been dreaming of finishing the second novel and immediately starting in on the last for some time now, just so I can get and keep the strong momentum going straight through. Now, exactly one week until the official release date of Mockingjay, I know that I’m going to have to hurry up and get through the second novel if my dream is about to become a reality. I still have other books to read and interview questions to write, but that doesn’t mean that I don’t have some time to spare to read CatchingFire this week, I just need to get into the mood.

To help myself (and you!) get into the the spirit of the games…The Hunger Games trilogy that is, I decided to put three different CatchingFire promos head-to-head in an all-out battle. While two of these trailers are similar, one is incredibly different, which is interesting because it appears as though Scholastic produced them all. Check them all out and put in your vote for which trailer should have the life of fame and fortune promised to the lucky Hunger Games contestants.

Leave a comment letting me know which of the three promo videos you prefer and why. If you think your friends will be on your side, send the link their way. We want to show Scholastic which promo video they made leaves the best, get-up-and-buy this book feeling or is the most aesthetically pleasing. The criteria is up to you, and the only rule is that there are no rules. Now, may the results be EVER in the best Catching Fire trailer’s favor!