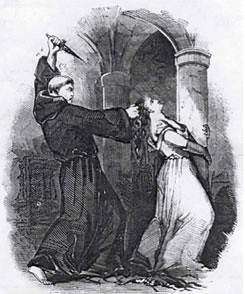 Just as local bookstores carry twenty or more copies of certain books, and one copy of others – if you’re lucky enough to find them at all. More often than not, book bloggers read and write about books that are already getting plenty of publicity and media coverage, rather than those that are slightly less present. I’ll admit that I do the same, but once in awhile, I think that we need to give recognition to books that haven’t and aren’t going to make the New York Times Bestseller list. Today, Book Blogger Appreciation Week wants us to recognize books or genres that are under represented, and since I’ve always loved Horror and Gothic novels, I wanted to highlight books should be on the reading lists of everyone who loves this genre too. Take a break from Stephen King or Clive Barker and gives these books a try!

During my university days, I read heavily within 18th and 19th century examples of Gothic literature from both the Classic Gothic period from 1764 to 1812 and those that were written from 1812 till the end of the 19th century with novel. Some of the latter were actually examples of the typical Bildungsroman, but had Gothic elements, while others were monster narratives outright. Today, I want to talk to you about two of my favorite novels from the Classic period as well as contemporary YA Gothic novel that deserves your attention. (However, if there is interest, then maybe I’ll make this a semi-regular post with tons more Gothic novels that you need to read – just let me know!)

Ever wonder where horror novelists got their ideas? Well, I’d say they were all influenced by Horace Walpole either directly or indirectly (when someone they were influence by was influenced by him). This statement might seem like a pretty big leap if you don’t know who he is or what he did, but his novel, The Castle of Otranto gave the English world the word “Gothic” in the first place when he subtitled it, “A Gothic Story.” In my opinion, this little tidbit alone makes it the place horror lovers need to start if they want to explore the roots of their favorite genre. Employing the Gothic theme that the sins of the father will be revisited on the sons, this novel is about a tyrant named Manfred, who tries to combat a prophecy that would see his family deposed from their current residence whenever they became “too large to inhabit it” by forcing his son to marry early and when that doesn’t work out attempting to get a new heir through unsavory means. If you aren’t a big fan of getting scared, then I think it’s pretty safe to say that this book won’t give you nightmares, though Walpole’s friend Thomas Gray said that after reading this book, him and his family were “afraid to go to bed o’ nights.” Our tastes have changed considerably over the years.

While Walpole’s are very one dimensional, the novel that Matthew Lewis wrote 32 years later called, The Monk is a much better thought out experimentation in the Gothic novel. The leading character is a monk named, Ambrosio, who has lived his entire life behind the walls of a monastery and thus has never been tempted my vice. Upon meeting a beautiful member of the congregation, this monk allows himself to be tempted through the influence of another figure to not only break his vows of celibacy, but also to use the most despicable ways imaginable to do so. Gruesome and shocking, this novel is certainly a page turner despite the fact that it was written over 200 years ago.

Finally, as promised, I want to draw your attention back to a novel that I reviewed a few months ago by Marina Cohen. You can check out my full review of Ghost Ride to get a complete look at my thoughts of it. If you have ever enjoyed a creepy ghost story, then I think that you should give this book a try. It’s about a boy who attempts a dangerous stunt with some friends and then starts seeing mysterious things and receiving strange messages. It’s one of the best examples of the Gothic genre that I’ve read in some time and has been known to give more than one adult reader trouble sleeping at night.

Let me know what you think about this post or these books if you’ve read any of them before. I might be able to give other periodic Gothic recommendations to my readers if there is interest!