by Melissa Montovani on September 23, 2010 in Realistic Teen Fiction • 4 Comments 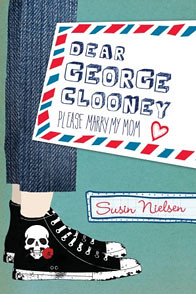 When 12-year-old Violet’s father left Vancouver for the sunny skies of L.A., the arms of his new trophy wife, and two new kids, it turned Violet’s world upside down. She believes, understandably so, that her dad thinks everything in his life is an improvement, including his new children. In the meantime, back in Vancouver, her mother has started dating the unfortunately-named Dudley Wiener after a series of poor relationship choices. Violet wants to take the control of the situation, so with the help of her best friend, Phoebe, she comes up with a plan to introduce her mom with George Clooney. Not everything goes according to plans – so readers get an inside look into the funny, infuriating, and poignant moments that permeate Susin Nielsen‘s Dear George Clooney Please Marry My Mom. Have a look inside this review to find out whether it’s the book for you.

Now, I’ll admit that everything I know about being a child of divorced parents was learned second hand. From what I do know, however, the experience that Violet goes through – what she brings upon herself really – is believable. The author presents us with the portrait of a young girl, who has been hurt not only by her father’s choices, but also by the poor relationship decisions of her mother. She does what any normal (and let’s face it pretty brave) teen would do in response to these problems. Sometimes she misdirects her anger in ways that are sure to make you laugh, and other times she takes it upon herself to test the new men in her mother’s life with results that are sometimes misguided, but always demonstrate Violet’s feeling that she has to act like the adult in the situation when her mother either can’t or is unwilling. Violet is a self-protector with a capitol ‘P’ if I ever saw one.

Not only does Violet demonstrate the need to protect herself and her family in ways that are beyond her scope of responsibility, but also is one of the most unreliable narrators that I’ve come upon in awhile. Often her unreliability is the direct result of her young age, but sometimes it’s just that her understanding of the world in general or of a particular situation is a little off. As a reader though I nevertheless always found myself sympathizing with her plight, even though I believe it’s something which would be easier for a teen than for someone my age. Why do I say that? Well, while I understood where Violet was coming from and agreed that her mother made a lot of wrong choices, I would have been very upset by some of Violet’s actions. Of course, it didn’t keep me from laughing at some of her antics along the way, and I’m pretty certain that you’ll be laughing just as much as I was.

Clearly, there is a lot of adventure in this novel, but there is also something else that I think a lot of teens, book bloggers, and adult readers will appreciate about this novel. As in her award-winning novel, Word Nerd, the main character is an active (and quite possibly over active) reader of fiction. Reading is one of the things that some bloggers argue is lacking in YA fiction, but Susin Nielsen has proved once again that not only can main characters be book worms, but also they can do so in a way that contributes to the narrative, which effects the character arc in a meaningful way. (Oh, and by the way, if you read Word Nerd, then one of the main characters, Amanda, is a friend of Violet’s mom, so get ready to read more of her story.) If you’ve been looking for a novel that is funny, poignant, and demonstrates a love of reading, then you’ll love this novel.