by Melissa Montovani on September 7, 2010 in Teen Book Trailers • 9 Comments 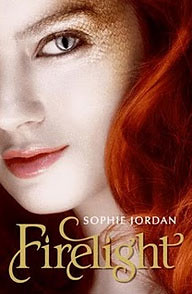 There are a lot of books coming out today that I’m excited about, like Extraordinary and the middle grade novel, The Familiars. However, there is another YA novel that has already been making waves in YA circles of late, which also makes its debut today. Yes, that’s right – it’s called Firelight, which is the first book in Sophie Jordan‘s new YA paranormal romance series.

It’s a novel that mixes mythical powers and forbidden love – this time between Jacinda, a draki, or descendant of dragons who can appear human, and Will, a hunter that was meant to find and kill Jacinda. Kerrelyn Sparks has calledFirelight, “Magnificent and masterful! A world so captivating, you’ll never want to leave!” So let’s see…what have we got here. Dramatic music, mysterious fog and lighting, a beautiful redhead who doesn’t look anything like the girl on the cover (not sure if that matters or not) and a conflict that viewers can’t completely understand (at least not with this trailer alone). Oh yeah, and a cool, fire-breathing trick, bet you didn’t expect that…or did you? I think it’s simply put together, but this only goes to highlight the story and the voice of the character. How can you go wrong with that? Of course, this begs the question…does the book trailer leave you feeling captivated? Does it make you want to read this book too? Watch the Firelight book trailer now and let’s compare notes:

One thing that this video does really well – better than a lot of the book trailers I’ve featured on Trailer Tuesday – is presenting the viewer with dramatic build up that never fully reveals the mystery of this paranormal romance novel. In my opinion, potential readers are presented with book trailers that give away too much of the novel or merely recite the book jacket copy. One of the things that more publishers and authors need to think about is that while it’s important to stay on message with the book trailer, they are a different entity from other aspects of the book marketing campaign and thus, they ought to do things a little differently while maintaining the flavor of the book. So today, I’d like to say congrats to whoever came up with the concept of this trailer because I feel that it did just that – the voice over is on message, but the “story” is told from a place slightly left of what you’ll find on the jacket copy.

Clearly, I’m sold on the trailer, but are you? Let me know if you appreciated the Firelight book trailer as much as I did or if you think there is something lacking. Who knows…Sophie Jordan or Harper Teen might very well check out this post and use your opinions about what works and what doesn’t to improve the next ones they help conceive.

← What's In My Mailbox?: The August 6th Edition
Extraordinary →