by Melissa Montovani on September 14, 2010 in Teen Book Trailers • 3 Comments 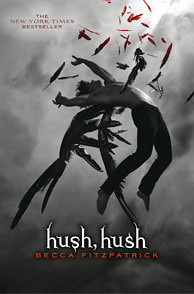 I recently had the chance to read and review Hush, Hush for my site, and I have to say that I really liked it. In case you haven’t read it yet or seen the book trailer, I figured that it would be worthwhile plugging this video on my site. It’s already had nearly 120,000 views on YouTube over the last year, which is, in my humble opinion, the mark of a really successful viral video.

What else makes a book trailer successful in your opinion? Do you think this one is? While I can’t read the minds of my blog readers, I can take the time to give my thoughts about this particular trailer. First, the music is dramatic, and for a book filled with mystery and suspense in the way that this one by Becca Fitzpatrick is, it fits. Second, while I prefer trailers that leave a little more of the story to the imagination of the viewer, then this one does, it certainly builds interest into reading the book rather than turning off readers by using a lot of imagery that relates well to the setting and characters of the novel. (Or at least that’s what I think though a comment on my review of Hush,Hush suggested that the book cover image made her think that it was a novel direct more toward male readers and might perhaps include battles and other major action sequences.) Though different opinions probably exist.

Why don’t you check out the trailer now, so the nitty gritty details of my commentary will make sense to you:

Now that you’ve seen it (either for the first time or again), what do you think? Personally, I think that the mixture of video sequences and moving still images create considerable amount of interest in the viewer and matches well with the dramatic music. However, as I alluded to above I prefer trailers that improve the mystery of the book, even if they’re really simple, like the one created for Sophie Jordan’s Firelight.

COSProductions definitely did a great job putting the Hush, Hush trailer together, and I can see how it would attract positive attention for the book, which is essential. However, I wonder if it wouldn’t have been better had they used images and text that didn’t exactly mirror the jacket copy. I’d love to know what you think!