by Melissa Montovani on September 9, 2010 in Middle Grade Fiction • 5 Comments 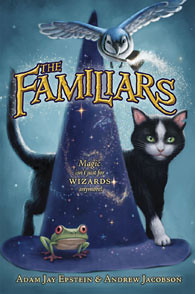 When a clever alley cat named Aldwyn hides in an unusual pet store, he thinks that he’s escaped from present danger. He’s even willing to play along, pretending to be magical, when Jack, a young wizard-in-training, picks him to be his familiar. Of course, he needs to convince more than Jack of his magical abilities: he needs to make Skylar – the know-it-all bluejay – and Gilbert – a friendly tree frog – believe in his worth. When the unthinkable happens, and Jack and other young wizards are captured by the Queen of Vastia, it’s up to the three familiars to find their loyals and save them before it’s too late. If my opinion of this middle grade fantasy adventure novel means anything, then The Familiars will be the perfect book to either read along with your child or students or have them cozy up with on their own. (Truth be told, I think even adults will enjoy it.)

TheFamiliars is a magical story that is sure to delight readers of all ages: I’m 30, and even I was sucked into the narrative with it’s twist and turns from the moment I picked it up. In particular, the question of whether Aldwyn, the hopelessly ordinary cat, will be able to use his own wits to get out of one situation after another and be of service to the two magically-endowed animals and his loyal, Jack, is one that will keep readers on the edge of their seats. Authors Adam Jay Epstein and Andrew Jacobson clearly have a deep love for fantasy, and their passion not only shows through, but also will become infectious to even the most reluctant of readers.

One of the most important themes in the novel is that of friendship and loyalty. Each of the familiars, even Aldwyn who only met Jack a few days before the quest began, have a deep connection with their loyals, and the affection isn’t just in one direction. Just as the familiars put themselves in harms way to save Jack, Marianne, and Dalton from the clutches of the queen, it is clear from the novel’s events that the loyals would have done the same for their familiars had the situation been reversed. While many other narratives wouldn’t make this relationship reciprocal, the authors show that any imbalance within the loyal-familiar bond would be disastrous. Similarly each of the familiars rely on one another to finish their quest. If one of them has a gift that can get them out of the situation, then they have to use it (I’ll let you read the story to determine what powers are ascribed to them though). If one of them has a family member who could help, then they should take it, even if they’re uncomfortable with it. Finally, if one of them keeps secrets from the others, then the sense of betrayal will be visceral. Children will, not surprisingly, come away from this novel with a deeper understanding for the value of true friendship and what it means to be a friend.

Epstein and Jacobson use a lot of humor to get their point across. Of course, what will be laugh-out-loud funny to a middle grade reader might only translate into a quick chuckle for an adult, so keep that in mind. Of course, this fact is to be expected, but I still think that adults who read this story with or separate from their children or students will feel a smile appearing on their face and a love for fantasy adventure narratives building in their hearts all over again. Get a copy of The Familiars. You won’t be disappointed, but you might start wishing that your own pet could talk too!

5 comments for “The Familiars”