by Melissa Montovani on October 6, 2010 in Paranormal Teen Fiction • 1 Comment 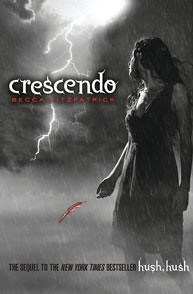 Whether you read Hush, Hush last year when it first came out, last month like I did, or have just recently put it on your TBR pile, I bet that you’re anticipating the follow-up, Crescendo just as much as I was. Why would I say that? Nora has everything she wanted: a great relationship with Patch and a guardian angel all wrapped up into one. While she might think that her life is perfect now, she gets stuck with an unfortunate lab partner in Chemistry, Patch starts pulling away from her, and she starts having strange nightmares about the past, including how her dad was killed. As Nora begins to dig deeper into her dad’s death and the mystery reaches a fever pitch, she begins to wonder if her Nephilim bloodline has anything to do with it, and if so, can she uncover the truth before it’s too late again?

When I finished the first book in the Hush, Hush series, I immediately picked up my copy of Crescendo. If I described Hush,Hush as unputtdownable, then the sequel was something akin to addictive for me. I stayed up late into the night reading it and got up early to finish it off in under 24 hours. The problems that some readers (not me) had with the first novel in the series – the manipulative relationship between Patch and Nora – are no longer as much of an issue. While at some points I found Nora a little whiny for my taste, this too seemed realistic to me given the new circumstances that she’s facing. (Feel free to argue with me otherwise if you think differently.)

Becca Fitzpatrick is now known for creating a plot that twists and turns at the drop of the hat, and she continues to shock and awe readers this time around. On a positive note, I didn’t suspect the path Crescendo was taking, and I think you’ll agree that the identity of the villain is considerably less predictable than it was in Hush, Hush. The suspense continually builds up higher and higher, ending in one of the most dramatic and unexpected ways possible, and since it was recently announced, I think it’s safe to say that there will be at least one additional novel in this series. Look for Tempest in the Fall of 2011.

One of the other great things about this book is that some of the mysteries which were only hinted at in the first novel, like Harrison Grey’s murder and the long time rivalry between Marcie and Nora, come to the forefront. You might not have had the answers you wanted before, but you’ll get closure and enlightenment on these questions at the same time as other issues pop up that will have you scratching your head.

Crescendo is everything fans of the Hush, Hush series were looking for and more. Look for it in stores everywhere October 19, 2010.

← Freefall Book Trailer
Can You Feel The Darkness Rising?: Win An ARC Of The Gathering! →