by Melissa Montovani on October 5, 2010 in Teen Book Trailers • 3 Comments 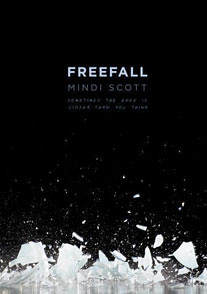 When your life spirals out of control, sometimes you don’t know where or how you’re going to fall, but you always know that you’re on the edge of an overwhelmingly scary precipice.

While I tend to read a lot of fantasy, paranormal, and Gothic novels for YABookShelf.com, anyone who knows me would realize that I’m a contemporary YA lover at heart. There is something about young men and women going through difficult situations that makes many teens feel like they aren’t alone, even when they aren’t suffering from the same problems. And though I’m not a young adult myself, I’m still young enough to remember what many of the challenges of adolescence are. I’ve never been in a situation like the one that Seth McCoy from Mindi Scott‘s contemporary YA novel, Freefall finds himself in, but there is something about the guilt that he must feel that coalesces with some of my own experiences. Is it any wonder that today, when this book is finally available on bookstore shelves everywhere in North America, I find myself wanting to support it?

In case you haven’t yet heard of this novel, I think that the first order of business is for you to take the time to view the short book trailer that was created to promote Freefall. Perhaps afterward we can discuss the good and bad points of it together? First, why don’t you view the video now:

One of the comments that a lot of the YouTube viewers made about the Freefall book trailer revolve around the music selected for it. Personally, I’d never heard of neither the band Sunhaven, nor the song, “Gentle Steel,” but I agree that it seems to fit not only the images selected for the trailer, but also what I imagine the book itself is like. Similarly, the images selected are attractive with a nice mix of color and black and white photos making up the video in it’s entirety. For these reasons alone, I found it enjoyable to watch. However, there is more to a trailer than these qualities, isn’t there?

While I think that it definitely works for the novel and clearly Mindi Scott is happy with it, but as we discussed a few weeks back with the slick looking trailer for Hush, Hush, I think there are some things that could be improved upon. First, I find it a little strange that some of the images of what is meant to be Seth and Rosetta depict different models. It’s one thing when you can’t see all of their identifiable features, but when the change is pretty obvious in a single viewing, I tend to think that it could be confusing for the viewer. That being said, I had the feeling that the images weren’t taken specifically for this video, possibly to meet budget considerations, which is perfectly fine. I’m merely speaking to possible improvements here.

On a second note, I wish that there was something a little more creative about the trailer itself. While the front cover depicts a dramatic image in the vein of the second If I Stay book trailer, there is nothing overly dramatic about the trailer. Instead, it merely follows the back cover copy and selects images that both reiterate the message of the superimposed text and hint at some of the deeper issues in the novel.

What do you think? Am I being too hard on this book trailer, which I’ll admit, does get the message across, which is more than I can say about some of the other ones I’ve seen. Are there other sorts of considerations? I, for one, would love to debate this with anyone who is up for it. Are you?

← What's In My Mailbox?: The October 4th Edition
Crescendo →