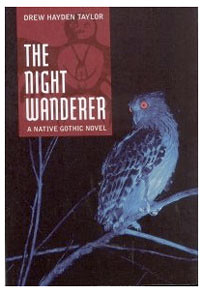 Since the market for vampire novels has become so saturated since the Twilight Saga became popular, some readers have become sick of this type of Gothic novel. Others still devour vampire novels like Dracula and his kind sucks the blood of human beings, without satiation. No matter which camp you sit in, Drew Hayden Taylor‘s adept combination of Native literature with the Western tradition of vampire mythology proves that The Night Wanderer is not remotely like the typical vampire story.

Tiffany Hunter is a 16-year-old Native girl, who lives on a quiet reserve called Otter Lake. However, when her father rents out her room to Pierre L’Errant, things start to change for all of them. It’s not that Tiffany, her father or Granny Ruth suspect, who he is – a 350-year-old Native vampire, who has finally returned to Otter Lake after many lifetimes of wandering. Tiffany for one has other things on her mind: her white boyfriend’s behavior, her escalating conflicts with her dad, and her mom’s new life with another guy. When she feels like she can no longer take it though, it’s an odd encounter with Pierre that really changes everything…for both of them.

To say that you’ve never read a vampire novel like TheNightWanderer, unless you’ve read this novel before, is neither an understatement nor at all inaccurate. Most novels about the undead are violent and bloody, and while this one describes some moments from Pierre’s past that could be described in this way, the present is a much different affair. Most vampire stories are about the destruction of communities or the plotting of killing these monstrous creatures, but Taylor’s novel is about strengthening the ties between the elder members of the Native community at Otter Lake and the younger generations. It’s about the importance of the land, linking the present day community to their ancestors’ way of life. And more than anything, it’s about a dead, or rather undead, man and a young, troubled teen trying to bridge the gap between their extremely different lives and experiences.

Of course, there is more to this piece of YA fiction than it’s distinction from the typical vampire novel. Teen readers from outside the Native community will instantly recognize something distinct about Taylor’s use of the English language, something almost philosophical, which touches on issues as diverse as language, racism, and what it means to be Native in the present day. How does Taylor show the distinction between the past and present of Otter Lake? Pierre’s memories of being on this reserve as a youth flow freely in his mind when he returns after 350 years of wandering. The contrast between his memory of the reserve both before and after contact with white settlers to Tiffany’s present day experience helps readers understand both the distinctions and the continuity with the past. Not only does this novel demand respect for the Native community and its culture, but also the quality of Taylor’s writing and characterization deserves this respect and much more.

Walking the fine line between a Gothic novel and coming-of-age story, the author delves into poignant moments in not only the lives of the two main characters, but also offers brief glimpses into the thoughts of other community members. While we expect to see the world through Granny Ruth since she’s integral to the two main characters, Taylor’s novel goes far beyond the narration of this secondary character’s thoughts. Characters that are only mentioned once in the novel, such as an Irish woman flying to Canada and an owl who thinks he should be camouflaged by the night sky, are articulated in stunning immediacy by the author. Rather than the normal complaints, however, when we do here a minor character’s thoughts, it is always in relation to Pierre. Through their thoughts, The Night Wanderer demonstrates the subtle but unmistakable fear that Pierre invokes in others. It is will skilled precision that Taylor presents normal, everyday occurrences with an uncanny flavor that you won’t soon forget.

From one Gothic lover to the thousands of others out there, check out Drew Hayden Taylor’s approach to YA Gothic literature – you won’t be disappointed.

Get The Night Wanderer now!

12 comments for “The Night Wanderer”