Great Gift Ideas: Get A Wireless Kobo For The Big Reader

by Melissa Montovani on December 11, 2010 in YA Book Accessories • 4 Comments 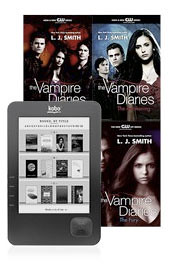 Ever since the Kobo eReader came onto the scene last spring in Canada, it has been talked about as being the low-priced option that’ll kill Kindle sales here. Why? Well, I think we can all agree that the major factor separating eReaders like the Kindle from the new kid on the block is the issue of digital rights management (DRM) protection. When you buy a Kindle, you limit yourself to buying books from the Amazon store, whereas a Kobo has an open platform, which supports EPub, PDF, and Adobe DRM format and even enables you to borrow books from your local library.

While some popular eReader models (Nook, Sony eReader Touch, and Kindle) are only available in the US and, in the case of the Kindle, the UK, readers from Canada, the US, UK, Austrailia and New Zealand can all enjoy the Kobo wireless eReader

. This is the lightest wireless eReader on the market, which makes it more comfortable to hold. Now you can even select your favorite color, so every reader can have an eReader that matches their personality. However, I’ve heard that the black eReader makes the screen contrast even more crisp and clear. Most eReaders allow you to change the text size, but I really like the idea that on the Kobo, you can select between a serif and a sans serif font depending on your preferences. Finally, the addition of a pearl eInk display makes the screen contrast 50% better than the previous model and makes it’s display quality equal to the competition.

It comes with space for 1000 books, and includes 100 free classic novels, so you can start reading right away. If you ever find that 1000 books doesn’t quite do it for you, then you can expand it carry up to 10,000 books with a 32GB SD card. Want to start reading some popular books right away? You can choose from over 2 million ebook titles – Try FREE! However, if you pick up a new wireless Kobo for yourself or for someone on your shopping list this holiday season, then you can select one of the Holiday Bundle Packs, which give the big reader on your list two or three additional books that have received a lot of buzz. Think your brother would like to check out the Millenium trilogy? Then the Millenium Trilogy bundle will be sure to light up his eyes. Have a sister who can’t get enough of the Vampire Diaries on TV? Perhaps she’ll want to take a bite out of the three-book Vampire Diaries bundle. Is your guy a big film buff as well as a reader? Then you can bet that when he sets his eyes on the books which inspired such films as Up In the Air, The Social Network, and Charlie St. Cloud in the Books On Film bundle that you’ll be remembered as getting him the best present ever. Finally, if you know someone who loves Canadian culture or would just like to learn more about it, then then Made In Canada bundle will spark some interest. Finally, if you know someone who likes to read romance novels, but who is embarrassed to read them in public, then she’ll definitely appreciate the Racy Romance bundle. In fact, there just might be a holiday bundle available for everyone on your shopping list!

Many of my reading friends got the Kobo rather than another eReader and are soooo happy with it that when my sister asked me for a recommendation, I gave my wholehearted approval to this model for the reasons stated. However, when I found out that there is a 30-day money back guarantee, I knew that I’d suggested the right option. If she doesn’t like it or doesn’t think that it’s the best eReading experience out there, then she can get a complete refund! Sound good – that’s what I thought too!

Are you in the US? Then use this promotional code Kobo20 — $20 off any Kobo wireless eReaders

← Suicide Awareness Week Wrap Up
What's In My Mailbox?: The December 13th Edition →

4 comments for “Great Gift Ideas: Get A Wireless Kobo For The Big Reader”