by Melissa Montovani on December 7, 2010 in Realistic Teen Fiction • 0 Comments 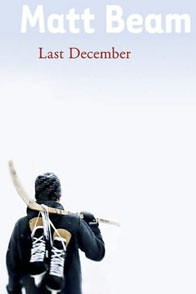 Fifteen-year-old Steven has a lot to tell his little sister Sam. He needs to tell her about Jenny and how just the freckles on her arm make his synopses go crazy. She needs to know about the Toronto Maple Leafs and the amazing thing he did to number 11 on the ice. He wants to tell her everything, including 18-year-old dropout Bryan and all his theories about chaos and trying to keep it together. And most importantly, he needs to explain why all of these random things have brought him to consider something drastic.

If you’ve heard anything at all about Matt Beam‘s novel Last December, then you know that, for Steven, the prospect of explaining himself might be a little more difficult than it first seems. If you haven’t heard of this novel before, then you might be wondering why. The complicating circumstances are this: Steven’s little sister Sam isn’t actually born yet and he isn’t entirely sure why he wants to “do himself in,” as he likes to call it. As a result, Steven’s story is written as a letter to his unborn sister, one that reads like the type of voice readers would expect a high school freshman to have, especially when the character isn’t entirely certain of his motivations from the beginning. Steven wants to explain everything, but he’s not entirely certain where his story should begin, and thus, he vacillates between several different beginnings: the current moment, last spring when he was in 8th grade, the first day of high school, and finally, the real beginning, the last day of November, 1982, just 12 days before his letter began.

Twelve days might seem like a short amount of time to stir a young teen boy to thoughts of suicide, and certainly it is a really compact time frame. However, if you keep in mind that often depressed teens are often unable to see the “big picture,” but instead, see their current problems and stresses as overwhelming mountains, then I think it’ll seem more possible and probable.

LastDecember is, overall, about a young boy who is just learning that his thoughts – both big and small – have an effect on his actions. Steven is a really impressionable young teen, and his older friend Bryan, who is manic depressive, has a lot do with influencing how Steven sees the world and it’s chaotic nature. More than any of the other novels I’ve read on the subject of teen depression and suicide, the relationship between Steven and Bryan helps to demonstrate the fact that often times, suicidal thoughts and suicide itself can often be influenced by the actions that others in one’s peer group or those a teen admires.

I would recommend this novel to teen boys, who are going through normal teenage experiences and perhaps, feel overwhelmed by them, more than to any other group. The brand of realism that Matt Beam creates here is consistently referred to as “balls to the wall” and when coupled with Steven’s discussion of Jenny, hockey, and his experiences with binge drinking, I strongly feel that boys and adult males would relate to the story better than women would.

← Thirteen Reasons Why
"Did This Happen To You?": Nina LaCour & The Underlying Questions →