by Melissa Montovani on December 6, 2010 in Realistic Teen Fiction • 6 Comments 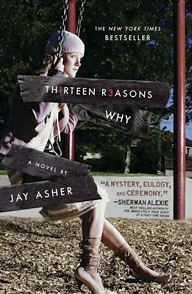 In Jay Asher‘s debut YA novel, Thirteen Reasons Why, Clay Jensen gets home from school to find a package without a return address waiting for him. At first he’s pretty excited, but as he begins to listen to the enclosed tapes, everything changes. Why? Well, he hears Hannah Baker’s voice — the voice of the girl he’d had a crush on for years and who took her own life two weeks previously — telling him that there are thirteen reasons she decided to take her own life and that everyone listening to the tapes is one of the reasons. Clay is certain that he hasn’t done anything to hurt her, but he keeps listening to a series of cassette tapes that change his life completely, bearing witness to Hannah’s pain and finally understanding a truth about himself that he never wanted to believe.

Written as a ‘conversation’ between the recorded voice of Hannah and Clay, who responds verbally and internally to the thoughts and actions of his deceased crush, I have to admit that Asher has written one of the most original concepts for a YA novel that I’ve ever read. Readers will want to hear how the experiences that Hannah goes through snowball together to become something unbearable. At the same time, Clay’s reactions, which at times sympathize with her experience and at others offer alternate ways of looking at the situation, make ThirteenReasonsWhy well rounded. Had Asher told the situation from only Hannah’s perspective, it would have had great insight into the thoughts and feelings that bring a teen from having normal teen issues to determining that suicide is their only way out. However, it would have been less hopeful, given her decision, and it would have been the perspective of an unreliable narrator, who is feeling her negative feelings so intensely that she wouldn’t have seen the other side of the story.

Not only is this New York Times Bestseller original, but also it’s a gripping page turner. From the first moment that Clay begins to listen to the tapes, he’s drawn into a side of Hannah that he never knew – the Hannah near the end of her life – and so is the reader. Just as he wants to understand how he could possibly have been responsible for Hannah’s death, so does the reader. Just as he wants to understand where his name will come up on the series of tapes, so does the reader. And most importantly, we want to see Clay become more than the dark and depressed person we see in the novel’s opening chapter as well as how he got to that point in the first place.

I’m not surprised at all by how well this novel has done over the last three years. It will speak to teens who are going through regular, teen issues, possibly with low level depression, but will also help readers understand that their actions affect others. As Hannah points out, some of the incidents she records are small, but they either set the actions of other individuals in motion or contribute to other difficult experiences she’s going through. Thirteen Reasons Why helps teen readers realize that treating their peers with respect is necessary because they can never really know what their peers are going through at any given moment.

6 comments for “Thirteen Reasons Why”