by Melissa Montovani on January 28, 2011 in Teen Book Trailers • 0 Comments 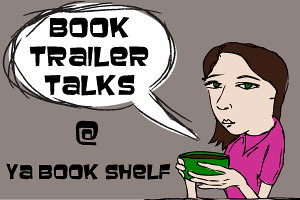 Book trailers are both a great means of getting the message out about new books and a chance for those involved in book publicity and marketing to offer a new way to experience the novel for its audience. If you’re a book blogger, a book marketer, an agent, a publicist, an author, or merely someone who loves reading YA novels and watching teen book trailers, what you think about them matters. Book Trailer Talks on YABookShelf.com is your chance to discuss and share your thoughts on the book-related videos you thought were cool and the ones you think are less than spectacular. Why? Well, because we all know that no matter how great a book is, if your experience of it is spoiled by a trailer that doesn’t live up to it in your eyes, then you might never get the chance to check out the book in the first place.

If you want to learn more about this feature, please check out the original Book Trailer Talks post. In the meantime, feel free to share your thoughts in this weekly meme on your blog, link up your post, or have your say in the comments below.

This Week’s Question: Do you think that it’s better for an author to have a trailer made (or make it themselves) even if a small budget means that it has an amateur feel or does competition with larger budget productions make the former stand out in the wrong way?

Now, I know that Book Trailer Talks is still in its infancy, but of any question that we’ve discussed this far, I’d say that this is, by far, the hardest one I’ve had to answer. The subjects that we’ve talked about already immediately brought an answer to mind that I could give without hesitation. This time, however, things are much different. The truth this time around isn’t black or white to me anymore, but exists in a gray area. Why? In part, it’s because I’ve seen both amateur and big budget trailers that have turned me off from time to time, just as I’ve seen ones (regardless of the budget) that have gotten me excited about checking out the books themselves.

Often, we associate the trailer that a book publishing company organizes as part of its marketing campaign with a much larger budget than an author who’s publisher is either unable or unwilling to produce one themselves. While there are numerous examples where I could prove that a author-financed trailer was not only successful, but also, occasionally, generates the impression of being a big budget production, I think it’s easier to prove my point in another way entirely — by demonstrating how, sometimes, when an author chooses to create a book trailer it has the power of being far more compelling and memorable than one simultaneously produced by a publishing company.
In order to do this, I want to use the example of the two trailers created to promote a novel that I loved a lot when I read it for the first time in 2010, namely Hold Still by Nina LaCour. If you haven’t yet read the book or watched the trailers, then I think I prefer to let these videos speak for themselves. They will tell you a lot about what this novel is about, and they’ll do so in very different ways. First, why don’t you watch the trailer created by Penguin Young Readers:

From the simple superscript written across the screen in a handwritten-style of font, which not only repeats words from the novel, but also re-creates the aesthetic presentation of the novel, to the simple drawing style of the novel’s illustrator, Mia Nolting, this trailer perfectly blends in with the look and feel of the original hardcover release. In this case, I don’t really like the piano music playing over the trailer, but it’s mainly because music is such an important element in the novel and in the recovery of the main character — Caitlin — and unfortunately, the choice made by the publisher is completely antithetical to the spirit of the novel. It makes it seem like a depressing story, and it really isn’t…even though it is certainly a sad one.

Now, please check out the other trailer that was put together for this novel by the author:

As I hope you can see (or if not — I believe), this smaller budget trailer, filmed on a super eight camera offers a very different tone for this novel than the first one presented. Yes, it is sad, but at the same time, it celebrates the friendship between Caitlin and Ingrid visually and through the voice over. It also uses a song in the background — “Call it Off” by Tegan and Sara in case you were wondering —, which is in keeping with the vision Nina LaCour had for the music Caitlin listens to repeatedly when she was writing the novel. While these elements are different than the first trailer, I love that this one also uses the illustrations from the novel just like the trailer created by Penguin Young Readers did.

I don’t mean to say that a smaller budget can always outdo a large one, I just want to show to my readers that it can be possible. But, what do you think?

Next Week’s Question: What are the elements that you look for in book trailers? Do you think they are common or do you believe that more people who produce book trailers should move toward adding these elements in the ones they make to promote the books for which they’re responsible?